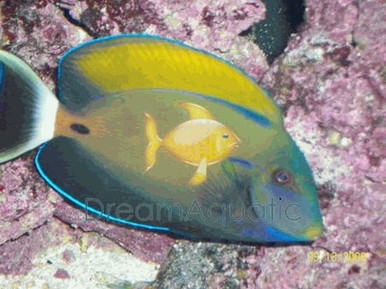 The Fowleri Tang Blackspine Surgeonfish (Acanthurus fowleri) is a tropical surgeonfish species (Acanthuridae family) and is known to occur in the waters of Papua New Guinea, Indonesia and the Philiippines. This species can be found on coral reefs and may be found in pairs but is generally seen to be solitary. It can be seen on coral reefs grazing on algae on sponges and is generally seen from depths of 10-45 metres. The body is brown in colour and the head is blue and just behind the eye there is a blue arced shaped marking that is a key characteristic of this species. There is a large black mark at the base of the caudal peduncle and a white stripe running around the tail. The Blackspine Surgeonfish (Acanthurus fowleri) grows to a maximum length of approximately 45cm. Maximum Size: Fowleri Tang grows to 18 inches in length. General Size: This Fowleri Tang is about five to eight inches in length. Minimum Tank Size Suggested: A 100 gallon or larger aquarium provides a good environment for these Fowleri Tang. Habitat: Acanthurus fowleri is a tropical fish which is found in coral reefs in the Philippines, Indonesia, Papua New Guinea, Solomon Islands, and Australia. It is also commonly known as the Fowler's surgeonfish or the Horse-shoe surgeonfish. Tank Conditions: The Fowleri Tang should ideally be kept in temperatures between 72 and 78 degrees Fahrenheit. A pH value of 8.1 or 8.4, and a specific gravity of 1.020 to 1.025 should be maintained. When kept with invertebrates, the specific gravity range should be 1.020 to 1.025, for the invertebrate species. In a fish only aquarium, the specific gravity should fall between 1.020 and 1.023. Feeding and Diet: The Fowleri Tang fish is a herbivore. Its main diet consists of marine algae, having an unusually long digestive tract to digest the plant matter they eat. They are constant feeders and in nature spend most of their day grazing. A habitat with algae growth is good for them, which in turn helps to keep the algae in an aquarium cropped and in check.