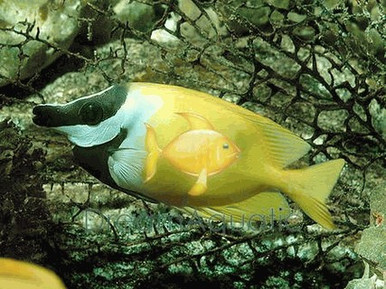 Foxface Rabbitfish - Lo vulpinus The Foxface rabbitfish is sometimes called the Badgerfish, but that name usually refers to Siganus virgatus, so the name Foxface is usually used in the trade. Some local fish stores may simply call them Yellow Rabbitfish The Foxface rabbitfish are active fish, although easily frightened. They come out of the Pacific Ocean, although not overly popular near Hawaii. They are a very bright yellow color, with a black spot near the rear of them, and white and black on their head for contrast. A very pretty fish, and when the spines are erected, they are quite a show. Fortunately, the Foxfaced rabbitfish are quite peaceful in the aquarium. They are seldom aggressive towards new additions, even if they are the same color and shape. However, due to their poisonous, turn off the lights for 48 hours after adding new fish to the tank. This is one of the best ways to control aggression towards new additions. Except in groups in larger aquariums, it is best to have only one Foxface per tank. The results of combining them with other Rabbitfish species, like the Spotted Rabbitfish, cannot be generalized upon as of yet. While Foxface rabbitfish are peaceful, the fish can hold their own in a tank quite well. Maximum Size:
This species grows to 10 inches in length. General Size:
This Foxface rabbitfish is about seven inches in length. Minimum Tank Size Suggested:
A 55 gallon or larger aquarium provides a good environment for these Foxface rabbitfish. Tank Conditions:
The Foxface rabbitfish should ideally be kept in temperatures between 72 and 78 degrees Fahrenheit. A pH value of 8.1 or 8.4, and a specific gravity of 1.020 to 1.025 should be maintained. When kept with invertebrates, the specific gravity range should be 1.020 to 1.025, for the invertebrate species. In a fish only aquarium, the specific gravity should fall between 1.020 and 1.025. Habitat:
Range: Hawaii, Tahiti. And region of Indo-Pacific ocean. Diet:
The Foxface rabbitfish is a omnivore and likes to eat variety of chopped foods (meats & veggies), algae, live foods (worms & Mysis Shrimp). Very difficult to feed- see below. Feeds on coralline algae and sponge in the wild. Offer a varied diet including frozen.