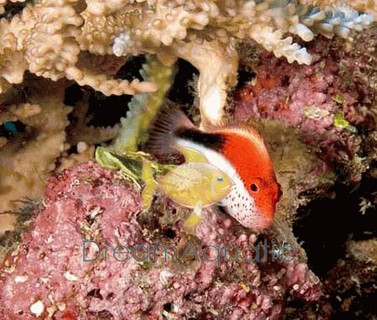 Freckled Hawkfish - Paracirrhites forsteri Freckled Hawkfish strictly tropical and a member of the family Cirrhitidae, this perciform marine variety are usually found in the coral reefs of both the western and eastern Atlantic and Indo-Pacific. A total of 12 genera and 32 species, Freckled Hawkfishes have numerous morphological features that are alike with Scorpionfishes belonging to the family Scorpaenidae. Comparatively large heads and thick, elongated bodies being the most prominent features, Freckled Hawkfishes comprise merged dorsal fins, the first being made out of a total of ten connected spines. The tip of every spine feature trailing filaments, the sole factor behind its family name Cirrhitidae (Latin cirrus means fringe). The tail fins have a rather rounded and shortened appearance while the pectoral fins are enlarged and skinless. Cycloid or ctenoid scales are another prominent mark of the Freckled Hawkfish and so are its vibrant colors that made it a popular figure among the ones into the aquarium hobby. However, Freckled Hawkfishes are not sexually dichromatic on a broader basis, which means their sexes cannot be distinguished solely by the coloration. The Freckled Hawkfish spawns at night; it prefers the water's surface while releasing numerous tiny buoyant eggs. What makes the Freckled Hawkfish an oceanic spawner is their tendency to drift with the ocean currents until hatching gets over, which usually takes around three weeks. The tendency is also thought to be the reason behind its unsuccessful breeding inside the aquarium. The long-nosed Hawkfish is however, an exception. But the prime characteristics that sets the Freckled Hawkfish apart from any other aquarium breeds is its protogynous hermaphrodism; the transformation of the functional female Freckled Hawkfishes into males that occur if the dominant male dies. A predator dwelling mostly at the bottom of the sea, the Freckled Hawkfish loves perching on rocks and on coral heads; it is a habit they developed for preying. Threats make it take shelter under rocks or coral heads. More inclined towards a solitary life, the Freckled Hawkfish is also an aggressive entity ironically to its own species as well as the others when given the same water to swim. Maximum Size:
The Freckled Hawkfish can grow up to a maximum size of 12 inches. General Size:
The Freckled Hawkfish generally attains a size of 9 inches. Minimum Tank Size Suggested:
The Freckled Hawkfish being a rather large species, a tank no less than 75 gallons capacity is a must. Tank Conditions:
Sandy-bottom with coral heads and stones for the Freckled Hawkfish to perch upon and hide in. Habitat:
Found extensively in Southern Hawai'i and central Polynesia, Micronesia, Melanesia and across the Indian Ocean to the coast of Africa and the Red Sea. Feeding and Diet:
A carnivore by nature, the Freckled Hawkfish prefers crustaceans like shrimps and crabs as well as smaller fishes; however, in captivity, any fresh or frozen meaty fares suitable for marine carnivores shall be enough.