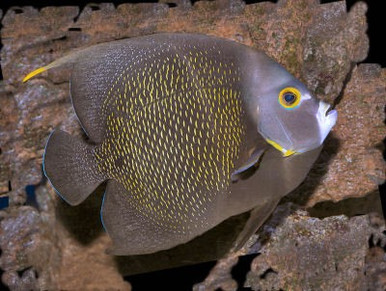 French Angelfish - Pomacanthus paru The French Angel is a beautiful, large fish that can be quite impressive for people qualified to keep it. Temperament can be an issue with French Angelfish. They are considered semi-aggressive and may quickly become the dominant fish in your tank. Given their potential adult size of 15 inches (38 cm) and their intolerance of their own kind, you should plan on keeping only one of them in your aquarium. French Angelfish have been noted to be fairly disease resistent but you still need to take proper pre-cautions and use a quarantine tank before introducing them into your main tank. Because French Angels grow large lengthwise and are quite tall, it is important to offer them hiding places of an appropriate size. This means a large aquarium for adults. Because they do grow quickly, most people suggest starting a juvenile in the same tank it will reside in as an adult. French Angels are considered to be rather hardy for a larger Angel species. At maturity, French Angel Fish can reach about 16 inches (40 centimeters) in length. Their sides are predominantly black and dark gray, syncopated with yellow accents created by the yellow edge of each black scale. The heads of French Angels are bluish gray, separated from the body pattern with a black band. The fins are also black, and the French Angel has a yellow ring around its eye. Juvenile French Angels are much different in appearance from adults. Their bodies are all black, with several bold yellow vertical bands located at regular intervals over the body. A fairly hardy fish, French Angelfish can live for a very long time if given proper care. They will eat most aquarium food including smaller fish and invertebrates. It is important to provide them primarily with marine algae. A large tank with lots of live rock, algae and sponges makes it easier to care for this species. Recommended Tank Size: The French Anglefish requires a 100 gallon or larger tank with live rock for grazing and hiding. Origin: French Angel Fish are native to the western central Atlantic. They range up from coral reefs in Brazil toward North America, where they can be found off the southern coast of the United States. Most French Angels are collected from the Caribbean, or from regions in South America. Specific Care Information:
A French Angel should be kept in an aquarium of 100 gallons or more. The temperature should remain between 72 and 78 degrees Fahrenheit (23 to 26 degrees Celsius). The pH value should be 8.3 or 8.4, with a specific gravity level between 1.020 and 1.025. For a fish-only aquarium, the lower part of this range would be better, though in an aquarium containing invertebrates, the specific gravity should always remain between 1.023 and 1.025. French Angels should be provided plenty of open space for swimming in addition to hiding places large enough for an adult-sized fish to fit into. These fish should be carefully observed in an aquarium containing invertebrates, since they may nip these animals. One important aspect of a French Angel's diet is variety. Items like mussels, clams, sponges, mysis shrimp, spirulina, and algae are all commonly offered. Diet:
Feed a varied diet consisting of large chunks of meaty foods. These foods include krill, raw table shrimp, squid, clam and mussel. It is also a good idea to occasionally supplement with some type of herbivore diet containing spirulina and supplement with a sponge fortified formula specifically for Angelfish. Gender
No reliable way to determine the differences between males and females