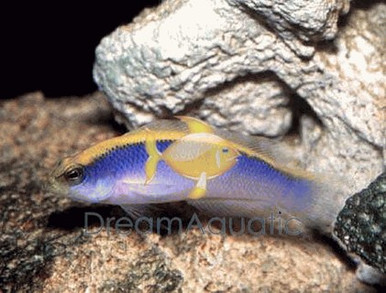 Flavivertex Dotty back Fish - Pseudochromis flavivertex The Flavivertex Dotty back Fish is also commonly known as Blue Dottyback as well as Sunrise Dottyback. Its body is primarily blue with yellow shades at the fins and to the eyes. Its known as sunrise dottyback because of the yellow shades on its body. This species is of a very curious nature and it swims constantly at different places. They swim at middle and bottom level. This species is semi-aggressive in nature. Two or more members of this species can be kept together in captivity; however, both of them have to be introduced at the same time in the aquarium. If a member of the same species is added later on in the tank, it results in a fight. This is because they are very territorial. This fish is blamed for ecological damage in different countries. The care level needed to nurture them in captivity is easy to achieve. This species is a very good choice for aquariums or tanks. This is due to its very colourful body and less care level. Tank bred specimens of Pseudochromis flavivertex is available for purchase in the market. So far as reproduction is concerned, they are egg layers. Maximum Size:
This species can grow up to 4 inches in length. General Size:
This species is generally 2-3 inches in length. Minimum Tank Size Suggested:
The water holding capacity of the tank must be a minimum of 30 gallons. This is due to its tiny size. Tank Conditions:
The Pseudochromis flavivertex should ideally be kept in temperatures between 77 and 80 degrees Fahrenheit. The Ph balance of the water should also be maintained between 8.1 and 8.3 as they prefer alkaline content of the water to be high. The specific gravity should be maintained ideally between 1.020-1.025. The tank must have plenty of hiding places. Plants should also be there at the bottom of the tank to simulate their natural habitat. Habitat:
The Dottyback is found distributed in North America. They are found in large numbers ranging from New Brunswick in Canada to South Carolina in the USA. They are also found at Red Sea. Feeding and Diet:
Pseudochromis flavivertex is carnivorous. Mantis shrimps and brine shrimps are its favorite course in the menu which covers items such as bristle worms and frozen foods. However, frozen foods form a part of its diet only if it is in an aquarium. Besides, zooplanktons are also part of its diet.