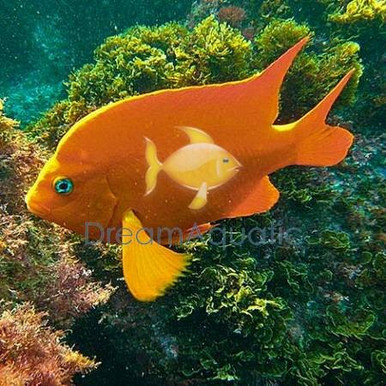 The Garibaldi Damselfish comes from the cool waters off of the coast of the Eastern Central Pacific Ocean, and is one of the largest fish in the damselfish family. The Garibaldi Damselfish is a striking orange color, and as a juvenile, is marked with many blue spots. The fins of the juvenile are also outlined in blue adding to its beauty. The adult fish is a rich orange in color. The common name refers to the Italian revolutionary Giuseppe Garibaldi, who famously wore a bright red shirt, as did many of his followers. These plucky little orange guys are my island favorites. Their common name is Garibaldi or Garibaldi Damselfish and they're California's state marine fish (the state's freshwater fish is the golden trout). To scientists, they're know as Hypsypops rubicundus, but to most people visiting Catalina, they're just those orange fish you see near the shore. The Garibaldi Damselfish grows very large and is an extremely long-lived fish, with a lifespan of up to 25 years. This fish requires an aquarium of at least 100 gallons with plenty of live rock for territories. They are extremely aggressive towards their own kind, and only one of this species should be kept in the same aquarium. Habitats: Adult Garibaldis maintain a home territory. The male clears a sheltered nest site within his territory, and the female then deposits eggs within the nest. The male subsequently guards the nest until the eggs hatch after 19_21 days. During this time period, the male garibaldi aggressively tries to keep all other fish away from the very edible eggs. Like all male damsel fish, the male Garibaldi will boldly attack much larger swimming creatures, including humans, to the point of biting divers in order to try to drive them away from the area where the eggs are deposited. Characteristics: Garibaldis grow up to 30 cm (12 in) in length. Juvenile Garibaldi are not as bright in color, but have iridescent blue spots which they lose as they become adult. They live from very shallow water to depths of up to 30 meters (100 ft), usually in association with reefs, and typically over rocky sea-bottoms. They feed mainly on invertebrates that they remove from the rocks. Minimum Tank Size: If only Garibaldi Damselfish are to be kept, a 100 gallon aquarium can be used, though larger sizes are preferred. These fish are reef safe. Feeding and Diet: Garibaldi Damsel diet should include various meaty foods, herbivore preparations, and flaked foods. Breeding: The Garibaldi Damselfish is sexually dimorphic, with the male taking on a larger size and exhibiting a lobe on the front of the head. These fish have not been successfully bred in captivity.