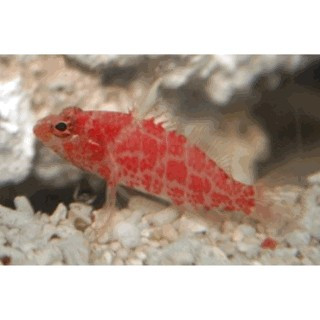 Geometric Pygmy Hawkfish - Plectranthias species - Geometric Pygmy Hawk - Geometric Flame Hawk Geometric Pygmy Hawkfish rarely seen in the aquarium trade , the Geometric Pygmy Hawkfish, is both colorful and animated. The perfect reef aquarium fish, it attains a maximum length of only about 2 inches. Scientifically, it is a closer relative to the Anthias than the Hawkfish, but is associated with Hawks because of its overall shape and behavior. It may be seen resting on and moving from coral perch to coral perch. There is a perceived benefit to its perching and swimming over corals as it is thought to help facilitate water movement among the coral heads. It will typically tolerate other Hawkfish. Because of its size, it is a perfect fish for both reef aquariums and the popular Nano aquariums. This stunning fish went from unknown to the trade to mega popular record time. The one shown is one of the first we encountered, and the only species in its genus available to the trade. If you've found your way here by way of our availability section, we have this fish available now. The perfect reef aquarium fish, it attains a maximum length of only about 2.5", and its very easy to care for. Maximum Size:
For both the male and female, the maximum size goes up to 3 inches and sometimes they can reach even 5 inches. General Size:
For both the male and female, the general size goes up to 1 to 2 inches. Habitat:
Any area with rich coral growth and clear water (lagoons, channels or seaward reefs) of at least 40 m can nest the Spotted or Pixy Hawkfish; thus the Indo-Pacific region, the Red Sea and the Eastern Pacific is the place to find to find it; to be more precise, it is between Gulf of California and Colombia and the Galapagos Islands the Spotted Hawkfish can be found in galore. Feeding and Diet:
The Geometric Pygmy Hawkfish diet should include a variety of marine meats, frozen preparations and live feeder shrimp. Bottom-dwelling invertebrates and zooplankton are also its favorite food.