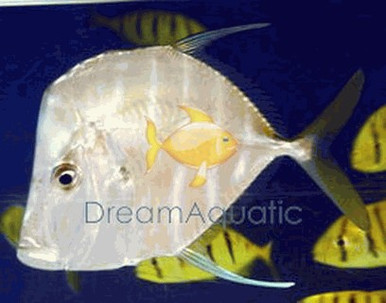 The Giant Lookdown Fish, sometimes known as the Threadfin Lookdown, is best known for how thin it is, and its bright, shimmering blueish-silver scales which are highly reflective. A lookdown is very deeply compressed fish. Lookdown are in the Jack family. The scientific name is Selene vomer, they range from the Maine all the way to Uruguay. They generally live in shallow coastal waters over sand or mud. When young they have long filaments coming off the first dorsal spine of the dorsal fin. Although the lookdown is similar to the Atlantic moonfish, it can be distinguished by its dorsal and anal fins, the second ray on each fin being many times longer than the surrounding rays. This gives the dorsal and anal fins a noticeably scythe-like shape. Also, the dorsal fin of the lookdown has 9 spines and 23 rays, while the anal fin has only 3 spines and 18 rays. The lookdown, like the Atlantic moonfish, had a deep, rhombus-shaped, laterally-compressed body. The head has the mouth set low and the eyes high. The overall profile of a lookdown's head is concave. The caudal fin of the lookdown is forked, as in the Pompanos, while the pectoral fin is similar to a scythe and reaches the middle of the second of the lookdown's dorsal fin. Giant Lookdown Fish are usually described as being silvery on both sides with darker tints on top. Young lookdown have several faint, vertical bars that fade as the fish grows. The longest lookdown known was 48.3 cm long, the heaviest known lookdown weighed 2.1 kg. Maximum Size:Giant Lookdown Fish can reach up to about 16 inches. Minimum Tank Size: A 125 gallon or larger aquarium with peaceful tank mates, particularly those that are not fin nippers, is necessary. Habitat: In the western Atlantic, the lookdown is found from Canada and Maine south to Uruguay, which includes Bermuda and the Gulf of Mexico. Although lookdown are common in tropical, Atlantic waters, they are rarely seen in the Greater Antilles. Giant Lookdown Fish are found in both marine and brackish waters at depths of 1 to 53 meters. They usually live in shallow water near the coast, along hard or sandy bottoms. Juveniles may be seen in estuaries or near sandy beaches Lookdown usually swim together in shoals, but they often break away into smaller groups or even in pairs. Feeding and Diet: The diet of the Giant Lookdown Fish consists of meaty foods and occasional live items.