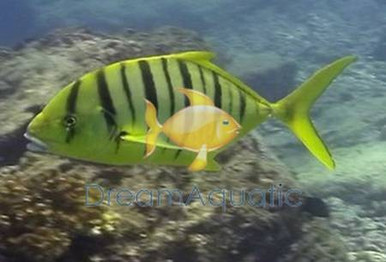 Gold Trevally Fish - Gnathanodon speciosus The Golden Trevally, also known as the Pilotfish or Golden Jack, is shimmering metallic-gold with black vertical bands across the body. The Golden Trevally will grow very quickly and requires a very large tank of several hundred gallons and should be kept in schools. The Golden Trevally is considered to be a pelagic fish species that is part of the Jacks and Trevallies family Carangidae. The Golden Trevally Juveniles are a gold/yellow colour with thin black stripes that run down the side of the body; these black lines fade a little as the fish matures. The juveniles are often seen with other large species, acting as ïPilot FishÍ for Whale Sharks, Manta rays, large sharks and even jellyfish, turtles and seasnakes. The Adult Golden Trevallyes are generally found in deeper water where they sometimes form small aggregations. They are a streamlined fish and are considered to be a fast swimmer and are known to be carnivorous feeding on other small fish species. Maximum Size:
The Golden Trevally grows up to 3 feet (36 inches). General Size:
These Golden Trevally fish generally will grow to 4 inches. Minimum Tank Size:
A 300 gallon or larger aquarium provides a good environment for these Golden trevally fishes. Tank Conditions:
The Golden trevally should ideally be kept in temperatures between 71 and 74 degrees Fahrenheit. A pH value of 8.3 or 8.4, and a specific gravity of 1.020 to 1.025 should be maintained. When kept with invertebrates, the specific gravity range should be 1.023 to 1.025, for the invertebrate species. In a fish only aquarium, the specific gravity should fall between 1.020 and 1.023. Habitat:
The Golden Trevally is found in Indo-Pacific and Eastern Pacific: southwestern coast of Baja California. Feeding and Diet:
A carnivore and likes to eat variety of foods, especially Mysis Shrimp, worms, and may catch small fish. May require live foods initially.