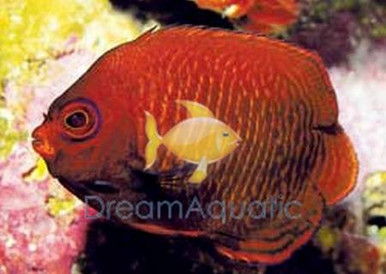 Golden Angelfish - Centropyge aurantius The Golden Angelfish is also known as the Aurinatus Angelfish or Velvet Dwarf Angel. This hard-to-find species is secretive in nature, making it both difficult to acquire and a prized fish in the hobby. This species is identified by its velvet-looking burnt orange/red color with thin, broken yellow vertical bars running along each side of the body. The Golden Angel was once a rarely seen fish in the industry but made popular by demand. Many of these specimens have a hard time acclimating to the bright lights of most home aquariums as these fish are collected from excessive depths. The Golden Angel requires a minimum tank size of 50 gallons with plenty of hiding places and live rock for grazing. This angelfish is best kept as the only dwarf angel in a tank. It will adjust rapidly if it is introduced as one of the first fish in a well-established aquarium, or if it is introduced and maintained with very peaceful tank mates. Often maintained by hobbyists in the reef aquarium, caution should be used if there is an abundance of large polyp stony (LPS) and small polyp stony (SPS) coral in the tank. This species has been known to nip at these corals as well as Xenia corals. In most cases the fish will not damage these corals, but rather just irritate them. Origin:
Indian Ocean. Specific Care Information:
Dwarf Golden Angelfish are generally peaceful fish but will often quarrel with members of their own species and even genus if they look similar enough. Though there are reports generalizing this species are 'reef safe', it is strongly advised to add them to a reef with extreme caution. The reason for this is that many of Golden species will behave like model citizens for a while, but one day will go after corals and clams for no reason. This may have something to do with the Dwarf Golden Angelfish being predominately plankton eaters as juveniles. An underfed adult may attempt to try something new and find that clams and corals are it's newest favorite diet. It is recommend purchasing the youngest specimen available in hopes it settles down and learns to eat a captive diet prior to learning that corals and clams are a tasty treat. It is important to provide Dwarf Golden Angelfish with plenty of good quality cured live rock and a well aquascaped aquarium with caves, archways and overhangs to swim through or hide in. Especially if there will be more than one Dwarf Golden Angelfish in the same aquarium. Members of the Centropyge genus are referred to as Dwarf Angelfish because of their smaller size in relation to their larger Chaetodontoplus, Genicanthus, Holacanthus and Pomacanthus cousins. Diet:
In the wild the Half Black angelfish has a varied diet consisting of algae and crustaceans. The Half Black angel is not considered reef safe as it may nip at large polyped stony corals, soft corals, zoanthids and clam mantles. There are occasional specimens that live very long lives in reef aquaria as peaceful citizens but the majority of these fish will often turn for no apparent reason when they are older. This may be easily explained as many of the Centropyge family are predominately plankton eaters as juveniles and will switch to consuming itÍs natural adult diet once fully grown. Sometimes all it takes is for an underfed individual to ïtestÍ a food source. This being the case, be sure to add this specimen to a well established tank and feed frozen mysis shrimp, meaty crustaceans such as shrimp and clam. Be sure to include algae such as spirulina. Breeding and Propagation:
The Golden Angel, like other dwarf angels, are hermaphroditic, difficult to breed, and indistinguishable in color from male to female.