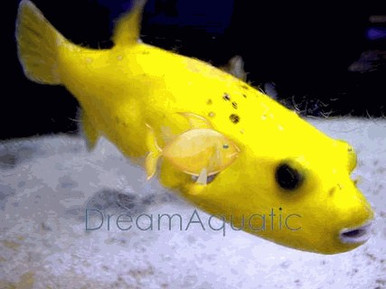 Golden Puffer - Arothron meleagris The Golden Puffer also known as Guinea Fowl Puffer and Spotted Puffer is observed to change its colour during different stages o f its life cycle namely black yellow and golden phase but this unique phenomenon is not demonstrated by the Golden Puffer when they are living in an aquarium. The black face is marked by its black with white spots over the body, the golden puffer in its golden phase exhibits rich burgundy to golden tan colouring with smaller white spots covering its entire body, these white spots are absent in the yellow phase. As the Golden Puffer lacks pelvic fins, it makes its way by using pectoral dorsal and anal fins. The Golden Puffer uses its fused beak like structure to crush the prey in place of teeth, the golden puffer is not meant for human consumption as its flesh is venomous when puffed up, it protects itself from predators by spreading its spines straight out from the body. The Golden Puffer being considered as the holy grail of the puffers. The Golden Puffer is in high demand when compared with its counterparts of the same group unlike other arothron puffers. This variety does not grow large and hence most suited for the home aquarium. Its behaviour ranges from semi-aggressive to not-aggressive, an interesting feature of this Golden Puffer fish is that it does not create any problems, when kept with other members of the genus and more than one fish can be kept in a larger tank. When the Golden Puffer fish is introduced into the tank, owing to its shy nature, it tries to hide itself. So a crevice or a cave provided in the tank makes the golden puffer comfortable to adapt itself, in course of time it comes out and spends more time in open. We should not do the mistake of keeping the Golden Puffer in smaller tanks as close, confined space makes it difficult, to adjust itself to the new surroundings, though it withdraws itself in the initial days in the aquarium, later being an hardy fish, it survives against bold fishes such as triggers, groupers and wrasse. The Golden Puffer is also a medium maintenance fish. Maximum Size:
The Golden Puffer grows up to 19 inches General Size Specifications:
The small size will be generally 2 to 3 inches; the medium will be 4 to 5 inches and the large 6 to 7 inches. Minimum Tank Size:
The Golden Puffer prefers a tank of not less than 125 gallons with plenty of places to hide & swim. Water Conditions: water quality should be very high (SG 1.020 - 1.025, pH 8.1 - 8.4, Temp. 72 - 78Á F). Habitat:
Range: Central America Feeding and Diet:
The Golden Puffer is a carnivore and likes to eat variety of chopped meats (fish, scallop, shrimp, squid, clam).