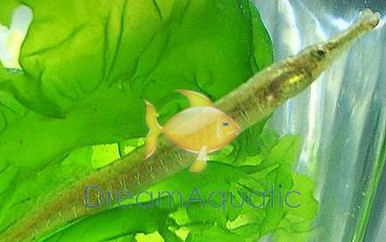 Green Pipefish come from the waters around Eastern Asia in the Pacific Ocean. Green Pipefish grow to around 7 inches at full length and should be kept in an aquarium of at least 30 gallons in size to provide them plenty of swimming and living room. Green Pipefish are carnivores and should be fed a steady diet of mysis and brine shrimp along with other meaty preparations. Green Pipefish are difficult to care for and should only be kept by the advanced aquarium owner for best results. The Green Pipefish Syngnathoides sp. originates in areas around Eastern Asia. This is a fish that requires specialized care and conditions, and is recommended to be kept only by expert level fish keepers who have set up an aquarium specifically to keep Pipefish and/or Seahorses. These fish are extremely peaceful and should not be house with anything other than seahorses, other pipefish, and non aggressive invertebrates. Stinging corals and anemones could potentially harm pipefish and should be avoided in a habitat designed for these interesting fish. Maximum Size: This species can grow up to 8 inches in length. General Size: This species is generally 3-5 inches in length. Minimum Tank Size Suggested: The water holding capacity of the tank must be a minimum of 20 gallons. Tank Conditions: The Syngnathus taenionotus should ideally be kept in temperatures between 72 and 78 degrees Fahrenheit. The Ph balance of the water should also be maintained between 8.1 and 8.4 as they prefer alkaline content of the water to be high. The specific gravity should be maintained ideally between 1.020-1.025. The tank must have multiple caves like structures. Plants and algae should also be there at the bottom of the tank to simulate their natural habitat. Habitat: The Green Pipefish is found distributed in Eastern Asia. Feeding and Diet: They are carnivore. The Green Pipefish diet consists of small live invertebrates such as vitamin rich brine shrimp, baby guppies, grass shrimp, mosquito larva and daphnia. Another major part of its diet, at least in aquariums, is mysid shrimp. The pipefish takes a long time to eat. This is due to its tiny tubular mouth. It should be fed at least three times a day in captivity.