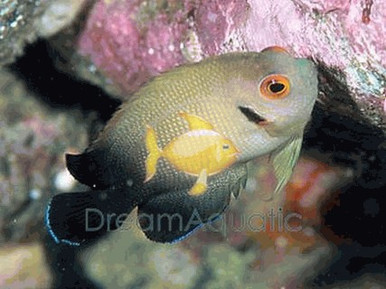 Half Black Angelfish - Centropyge vroliki Though plain in appearance, the hardy Half Black Angelfish stands out as an excellent addition to the home aquarium. One of the less aggressive of the family, the Half Black Angelfish is one addition that is more likely to behave itself in the home aquarium. The Half Black Angelfish is well known for cross breeding with both the Eibli and Lemonpeel angelfish creating some interesting hybrid colorations. Half Black Angels are feisty little fish that can be great fun to keep. They are normally good feeders and are fairly hardy. Because Half Black Angels are territorial, they may not get on well with other fish of the same, or similar, species. However, they are often passive and peaceful when kept with larger or more aggressive fish. They may be bullied by such fish, so you should observe your aquarium to be sure that all fish are allowed opportunity to eat and swim in open areas. As always, hiding places should be provided. Most mature Half Black Angels measure up to four inches in length. As the name would imply, the Half Black Angel Fish is half black. The front part of its body is covered in ligh gray scales, which fade into the deep black coloration that covers the back portion of the body. A yellow-orange coloring accents this black and white pattern. A ring around the eye and the outer edges of the fins are colored with this lovely shade. Origin:
Most captive Half Black Angels are taken from the Indonesia and the Indian Ocean. Specific Care Information:
Dwarf Half Black Angelfish are generally peaceful fish but will often quarrel with members of their own species and even genus if they look similar enough. Though there are reports generalizing this species are 'reef safe', it is strongly advised to add them to a reef with extreme caution. The reason for this is that many of Half black species will behave like model citizens for a while, but one day will go after corals and clams for no reason. This may have something to do with the Dwarf Half Black Angelfish being predominately plankton eaters as juveniles. An underfed adult may attempt to try something new and find that clams and corals are it's newest favorite diet. It is recommend purchasing the youngest specimen available in hopes it settles down and learns to eat a captive diet prior to learning that corals and clams are a tasty treat. It is important to provide Dwarf Half Black Angelfish with plenty of good quality cured live rock and a well aquascaped aquarium with caves, archways and overhangs to swim through or hide in. Especially if there will be more than one Dwarf Half Black Angelfish in the same aquarium. Members of the Centropyge genus are referred to as Dwarf Angelfish because of their smaller size in relation to their larger Chaetodontoplus, Genicanthus, Holacanthus and Pomacanthus cousins. Diet:
In the wild the Half Black angelfish has a varied diet consisting of algae and crustaceans. The Half Black angel is not considered reef safe as it may nip at large polyped stony corals, soft corals, zoanthids and clam mantles. There are occasional specimens that live very long lives in reef aquaria as peaceful citizens but the majority of these fish will often turn for no apparent reason when they are older. This may be easily explained as many of the Centropyge family are predominately plankton eaters as juveniles and will switch to consuming itÍs natural adult diet once fully grown. Sometimes all it takes is for an underfed individual to ïtestÍ a food source. This being the case, be sure to add this specimen to a well established tank and feed frozen mysis shrimp, meaty crustaceans such as shrimp and clam. Be sure to include algae such as spirulina. Breeding and Propagation:
The Half Black Angelfish is well known for cross breeding with both the Eibli and Lemonpeel angelfish creating some interesting hybrid colorations.