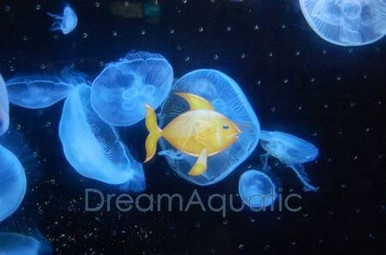 Jellyfish are from a branch in the animal kingdom called Cnidaria. All Cnidarians share a similar body plan, which can be described as a sack within a sack. These organisms posses no distinct head or structural organs, and yet they all possess one thing in common, Cnidae, specially modified stinging cells or nematocysts. Roundish bell has scalloped edges and a distinctive cluster of four round packets within the center. Outer scalloped edges of bell have a fringe of fine tentacles which capture food items and pass it to the stomach area. Bell is divided into eight sections and it is what pulses through the water. The circular packets are actually the gut where food is digested. Moons have four trailing oral arms. The most noticeable behavior of jellyfish is rhythmic pulsing of the swimming bell, which moves them through the water. The swimming pulsations are coordinated by nerve centers around the edge of the bell. Medusae can sense light and dark and can determine their orientation in the water. Some jellyfish swim continuously. This feature is important for oxygen exchange, which occurs over the entire body surface, and for feeding. Several species swim against the current. The result is that they all swim in the same direction and may become concentrated in large masses. Some species move up in the water at night and down in the day. The polyps can move using a "foot" and its extensions. Most jellyfish catch prey by the tentacles and fold the arm inward to bring the prey to the mouth. Many jellyfish do not swim actively while feeding but remain nearly motionless with their tentacles extended above the bell. For some medusae, the pulsations of the swimming bell force water through the tentacles and create whirlpools that bring prey into contact with the tentacles and oral arms. LOOK BUT DON'T TOUCH
Because of their beauty and the relaxing effect of their swimming pulsations, jellyfish have been a great success in public aquariums and even as household pets. In Japan jellyfish are kept as pets in special aquariums. Anatomy:
The jellyfish have two major body forms in their life. First is the polyp stage, characterized by either a non-moving stalk that catches food drifting by or a similar form that is free-floating. The second form is called the medusa stage, characterized by a round body with food catching tentacles hanging down. This is the form most people are familiar with. Diet:
Most jellyfish are passive drifters that feed on small fish and zooplankton that become caught in their tentacles. Jellyfish have an incomplete digestive system, meaning that the same orifice is used for both food intake and waste expulsion. Defending Themselves:
Jellyfish have stinging cells called nematocysts on their tentacles. When prey comes in contact with a tentacle, hundreds to thousands of nematocysts fire into the prey's direction. These stinging cells are latch onto the prey and the tentacles bring the prey into their large "mouth" for digestion. Breeding:
Jellyfish use both asexual and sexual reproduction. Asexual (ay-SEK-shuh-wuhl) means without, while sexual means with the uniting of egg and sperm for the transfer of DNA from two parents. The bottom-dwelling forms of some jellyfish reproduce asexually by budding new polyps from the body or foot. Polyps also produce medusae by another asexual budding process that takes place at a certain time of year and is triggered by environmental factors, such as changes in temperature or light level. During this process the polyp splits in two and forms one to several small medusae. The fully formed medusae break free by swimming pulsations and grow to adults over the course of a month or longer. The medusae of most species have separate sexes, but in a few species the same animal makes both eggs and sperm. No mating occurs. Sperm strands are released into the water by males and are taken up by females during feeding. In most species the fertilized (FUR-teh-lyzed) eggs, those that have united with sperm, develop into small larvae that swim to a suitable bottom material, attach, and develop into polyps. Some species lack a polyp stage.