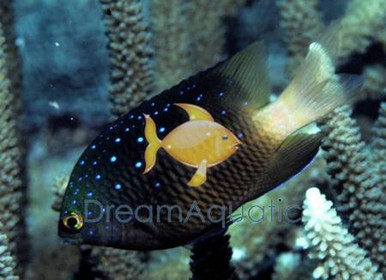 Jewel Damsel Fish - Microspathodon chrysurus As a juvenile, the Jewel Damselfish, also known as Jewelfish or Bluespot Jewelfish is black with sparkling blue dots. As the fish matures, it may turn brown to yellow and have smaller, indistinct spots. The Jewel Damselfish is a low maintenance fish and are reef compatible. These are also aggressive like all other damselfishes. The Jewel Damselfish will ignore invertebrates in the aquarium and feed on zooplankton and algae. Do not keep them with butterflyfish and clownfish.It is not suitable forpeaceful community tank. As with most Damselfish, the Jewel Damselfish grows from a docile juvenile into an aggressive adult. The Jewel Damselfish is even more aggressive than the average Damselfish. The Jewel Damselfish should not be kept with small docile tank-mates, rather with other aggressive community fishes. Numerous juveniles may be kept together; however, adults will often fight unless they are a pair. If you plan to keep several types of Damsels, it is recommended that you add them at the same time to avoid territorial disputes. Make sure to provide caves or hiding places for them. No significant markings or distinguishing characteristics differentiate males from females. The Jewel Damselfish can be successfully spawned in captivity. Their family is hermaphrodite by nature, meaning each fish can become either sex. The male Damsel is usually responsible for the care and maintenance of the eggs after the fish have spawned. Habitats:
The Jewel Damselfish are found in the regions of western atlantic ocean and carribean oceanic regions. General Size Specifications:
The Jewel Damselfish are found up to 6 inches or 20 cm in length. Upto 8 inches long Jewel Damselfish has also been found. They usually comes in different sizes. The small ones are from 2 to 3 inches, medium varies between 2 and4 inches and large sizes of 4 to 5 inches. Minimum Tank Size:
An aquarium of 50 gallons or larger provides suitable housing to Jewel Damselfish. They can easily swim and hide in such a mass tank. The high quality water is required for housing them. The temperature is kept usually between 74 and 80 degree Fahrenheit, specific gravity ranges from 1.020 to 1.025 and pH varies between 8.1 and 8.4. Feeding and Diet:
The Jewel Damselfish feeds on a variety of meaty items, herbivore preparations, and flaked foods including mysid shrimp, brine shrimp, and marine algae. The Jewel Damselfish is not a threat to corals, clams, or invertebrates.