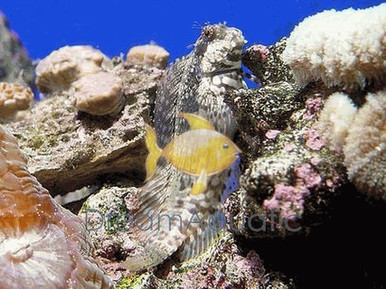 Lawnmower Blenny - Salarias fasciatus The Lawnmower Blenny, a.k.a. Algae Blenny, is a very popular algae eating blenny. These fish have a long slender body with a long dorsal fin that extends the length of their body. They are usually tan and white in color and love to perch on rockwork. The Lawnmower is aptly named for its ability to mow down hair algae. These fish have tons of personality. They make an excellent addition to any reef tank. They should be offered algae sheets on a regular basis if regular algae growth is not available. The Blenny Family is commonly confused with the Goby family. The Blennies are distinguished by their single continuous dorsal fin and habit of resting on the bottom with their body curved. These fish will usually have tiny appendages on the top of their heads called "cirri". Some Blennies inhabit tidal pools where the water is warm and shallow. They have incredible jumping ability and are known to jump from pool to pool, which lends to the other name they are known as: "Rock Skipper". Other Blennies are found hiding in crevices and caves at coral reefs. These fish have blunt heads and their teeth are combed, giving them the ability to scrape algae -- their primary food source -- from rock surfaces. Although this fish will get along with most any fish as juveniles, it will not get along with other Sailfin Blenny, Blennies of the same body type. May become belligerent as an adult and prone to attacking tangs, angels and other large fish when fully grown and will cease to eat algae as adults. Sailfin blennies can be prone to picking at clam mantles or corals as adults. Lawnmower Blennies are fairly drab looking with a long whitish body and gray to tan colored vertical bars on the sides. A long dorsal fin extends the length of the body. Small light-blue dots adorn the face. Delicate feathery projections called 'cirri' around the face lend character. Lawnmower Blennies are usually very good reef tank inhabitants in larger tanks. While somewhat plain, they are personable fish. They spend most of their day perched on rocks surveying their surroundings followed by short bursts of algae munching, then back to their perch. There have been some reports of them picking on clam mantles or stony corals, but no proof of that behavior, so it is probably a minimal risk. Maximum Size: The Lawnmower Blenny Grows up to 5 inches General Size Specifications:
The small size will come to you generally 1-1/2 - 3-1/2 inches not including the caudal fin. Minimum Tank Size Suggested:
The Lawnmower Blenny prefers a tank of at least 30 gallons with plenty of places to hide & swim. Water Conditions:
Does well within normal reef tank temperature ranges of at least 75-84ÁF. Habitat:
The Lawnmower is found Near Indo-Pacific. Feeding and Diet:
Lawnmower Blennies are primarily vegetarian. They have teeth that are adapt at scraping algae from the surface of rocks and the walls of the tank. They are frequently introduced to help control hair algae, but they seem to prefer to eat film type algae. They will usually take frozen or dried vegetable foods like Formula 2 and sometimes will take meaty foods like bloodworms. They do best in tanks that have algae on which they can forage throughout the day.