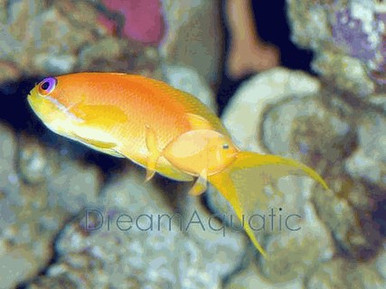 Lyretail Orange Female Anthias - Pseudanthias squamipinnis The hardiest and likely the most territorial of the Anthias, the Lyretail Anthias is one of the most commonly seen Anthias schools in the wild. In captivity it is recommended to keep only a single fish in smaller aquariums (around 55 gallons). If you wish to keep a group, it is best to house no less than 1 male and 8 or more females in a 180 gallon aquarium or larger. Can be kept with other peaceful community fish and care should be taken to ensure that you keep only one male per tank as they will likely fight with each other to the death. The Lyretail forms large schools that can number more than 2000 individuals. These schools are organized in a strict hierarchy with a relatively small number of territorial males at the top and non-territorial, low-ranking males and females filling out the bulk of the school. Anthias are protogynous hermaphrodites, which means that females can change into males. Territorial males will do their best to bully and harass females to prevent them from changing into males. Once they change into males, the former females will try to climb their way up the pecking order. For males who make it to the top, the reward is territory and a harem of females to chase around that territory. Within the females of a harem exists another hierarchy with the larger females usually dominating the smaller ones. If the ruling male dies, the dominant female will change sex (over about two weeks time) and take over the territory and the harem. This social structure is far from egalitarian and is all about who can kick the most fin. Thus, I am only getting one fish. I donÍt want to put up with the squabbling. Aquarists who try to maintain groups of these fish usually keep one male along with a harem of around eight females. This way the maleÍs attentions are divided up among the females so that no one female gets all of the grief. This usually works if you have a tank large enough to keep such a school and as long as none of the females try to turn male while the dominant male is still around. Because of their higher metabolism and constant activity in the water column, Lyretail Anthias require multiple feedings each day. Most Lyretail Anthias prefer dimly lit tanks, though there are a few that will learn to adjust to brighter lights of reef aquariums and will spend most of their time swimming in the water column and will need ample open water column to do so. Maximum Size: The Lyretail Anthias grows up to 5 inches. General Size Specifications:
Male - Approximately 3î _ 6î
Female - Approximately 2î _ 4î Minimum Tank Size Suggested: The BartlettÍs Anthias prefers a tank of over 125 gallons Water Conditions:
Keep water quality 72-78ÁF; sg 1.020-1.025; pH 8.1-8.4; dKH 8-12 Natural Environment: Inhabit reef faces and slopes/drop-off areas Habitat:
Lyretail Anthias are found near Tonga/Fiji Diet:
The diet is consistent with other members of the Anthias group - zooplankton and floating filamentous algae. In the aquarium, it should be fed a varied diet of mysid shrimp, vitamin-enriched brine shrimp, frozen preparations and other meaty items for zooplankton feeders. They prefer to be fed small quantities, several times daily. Breeding:
Lyretail Anthias species all share the trait of being hermaphroditic. If a dominant male perishes, the largest female of the group will often morph to take its place.