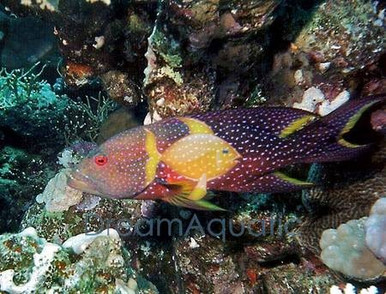 Lyretail Grouper - Variola louti The Lyretail Grouper is one of the most attractive fish to come from the Red Sea. As a juvenile, the Lyretail Grouper, also known as the Coronation Grouper, or Red Louti Grouper, is orange dorsally, and yellowish-white ventrally, with multiple spots. It often has some black patches separating the dorsal and ventral halves. As an adult, the body darkens to a deeper red or maroon, with multiple spots, and the tail takes on a lyre shape. The Lyretail Grouper specimen do remarkably better when collected from the Red Sea. This beauty is found from the western Indo-Pacific to the Indian Ocean; but the healthiest and most colorful specimens come from the Red Sea. The Lyretail Grouper have three spines on the gill cover, or operculum, one main spine with a lesser spine above and below. They also have complete and continuous lateral lines. Their pelvic fins bear one stout spine and five soft rays, and there are three anal fin spines. There are seven cartfilaginous gill supports, and usually 24 or 25 vertebrae. The Lyretail Groupers can grow in size upto 36 inches and can have a minimum weight of 8 kilograms. Every individual Lyretail Grouper in the trade has been between 100 and 200 millimeters (4 and 8 inches) in length. Smaller fish are the most desirable for an aquarium. These fish and all other basses should be transferred from tank to tank as little as possible. They become less tolerant of change as they grow. In Lyretail Groupers, the coloration changes dramatically from juvenile to adult. At 100 to 150 millimeters, the fish have a broad black horizontal mid-body band, red to yellowish above and whitish underneath. The midsize fish are an intense purple with bright blue spots overall. All adults become salmon colored with enlarged, lighter blue spots. The Lyretail Groupers spend most of their time in crevices of the reef. Provide plenty of caves and other dark spots for cover. It is best to keep only one Lyretail Grouper to a tank unless the system is very large (hundreds of gallons) and well-appointed with rock and coral. The Lyretail will probably become the dominant fish in the aquarium. As with most species of bass, it is not particularly aggressive, but it is carnivorous and will swallow any fish small enough to fit into its mouth. Like other large bass and groupers, the Lyretail Groupers soon learns to recognize food. It will accept live freshwater organisms as well as formulated, preserved, or frozen foods. Unlike some of its smaller brethren, the Lyretail is relatively hardy and disease resistant. Minimum Tank Size Suggested:
A 300 gallon or larger aquarium is required due to its size and eating habits. The Lyretail Grouper is an aggressive fish and may eat tank mates as well as crustaceans. Feeding and Diet:
The Lyretail Grouper prefers a diet of meaty foods such as krill, shrimp, and other small fish. Tank Conditions:
Most Lyretail Groupers are very tolerant of relatively poor water quality. Filtration should be adequate to handle the large tanks and occasional large wastes usually associated with basses. Any stable temperature in the range for tropical fish is acceptable. Although many aquarists maintain their systems at an artificially low specific gravity (1.018-1.023) to increase carrying capacity, lower parasite loads, and to save on salt mix, this is not a good idea with livestock from the Red Sea and even the Indian Ocean. Because the evaporation rate in the upper gulf can reach 1,600 inches a year, the normal salinity of water in the Red Sea is high. A constant specific gravity of 1.025-1.027 in an aquarium is better for Red Sea fish. You will be rewarded with much more colorful, vigorous, and long-lived specimens. Habitat:
The Lyretail Groupers occurs in tropical marine waters of the Indo-Pacific from close to the surface to over 100m in depth. In Australia it is known from central and north-western Western Australia and from the northern Great Barrier Reef to the central coast of New South Wales.