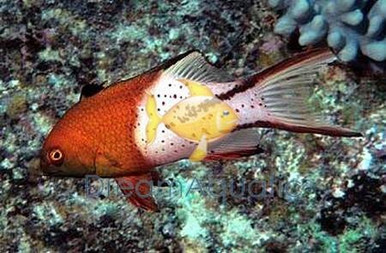 Lyretail Hogfish - Bodianus anthioides The Lyretail Hogfish has a very colourful body with splashes of half white, half orange. Maroon spots are distributed all over the body. The fins (both caudal and pelvic) are elongated. . Its main identification mark is its beautiful long tail. This is the reason why it is named Lyretail. They live peacefully with other tank inhabitants but become aggressive towards other members of the same family. They are easy to feed and they even eat frozen foods. However, live corals should not be kept inside the tank as they tend to eat them. The population growth rate is quite low. It takes 4.5 to 14 years for the present population to be doubled. They are caught very often throughout the world, to be kept in tanks for their bright coloured tails. Therefore, they face the threat of extinction. Maximum Size:
This species can grow up to 9 inches in length. General Size:
This species of hogfish is about 5-6 inches in length. Minimum Tank Size Suggested:
The water holding capacity of the tank must be a minimum of 75 gallons. Tank Conditions:
The LyretailÍs Hogfish should ideally be kept in temperatures between 75 and 82 degrees Fahrenheit. The Ph balance of the water should also be maintained between 8.1 and 8.4 as they prefer alkaline content of the water to be high. The specific gravity should be maintained ideally between 1.020-1.025. The tank must have lots of rocks to enable them to hide. Habitat:
This hogfish is mainly found in the Indo-Pacific region, more specifically, in the Red Sea and East Africa to the Line and Tuaotu Islands. In the Pacific region this type of hogfish is found north to southern Japan, south of New Caledonia. Australia also is home to this species. They are found in smaller concentration in eastern Caroline, Mariana and Marshall islands in Micronesia. Feeding and Diet:
Its diet mainly consists of mollusks but also crabs and sea urchins. This species is often found concentrated at areas, where gorgonians are abundant. So, coral reefs are ideal hunting grounds for Bodianus anthioides. Small fishes are also part of its diet. The younger ones often hide behind black corals. They are also found hiding in cave ceilings. Juveniles regularly clean parasites from other fishes. They even blow water over the sands to uncover preys like snail, small fishes hiding inside.