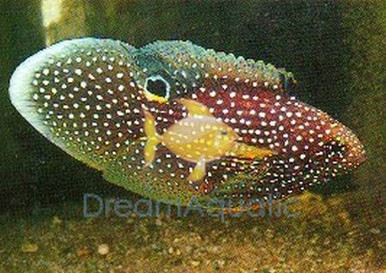 Marine Betta Grouper - Calloplesiops altivelis The Marine Betta Grouper or Comet is probably one of the most interesting of salt water fish! The Marine Betta Grouper is a stunningly beautiful fish that unfortunately requires a lot of care to do well in aquariums since they can be very hard to get to eat. They often refuse to eat anything but live food and can be very slow eaters making it hard to feed them in aquariums with other faster eaters. Marine Betta Grouper fish are predators with a very interesting hunting technique. They approach there pray swimming sideways and waiting for the prey to try to escape and when the prey try to escape on the side of the fish they have a 50/50 to escape towards the fish mouth. This behaviour is also believed to be a protection strategy since it is believed that the Marine Betta Grouper mimics morays with their spots and by swimming sideways. The eye spot at the base of the dorsal fin of the Marine Betta Grouper fools prey into thinking the mouth of the fish is at the wrong end. When the Marine Betta Grouper hunts it approaches its prey sideways and when the prey tries to escape by way of the tail, it turns out ot be the mouth and the fish is caught. Another theory is that the eye spot resembles the head of a moray eel, a very good defense against predators. The Marine Betta Grouper is harder to keep than other groupers since it much prefers live food and is slower to eat than many other aquarium fish. For this reason, it is recommended that this fish be kept as a single specimen or in a very sparsely populated tank. They are primarily active during the nights and prefer dimmed lighting. They are also not very good swimmers which mean that there has to be calm areas without much water movement if kept in a reef aquarium with fast moving water. Fish of this species become extremely shy if not provided with enough hiding places and will display a relatively shy behaviour even if provided with a large amount of caves. The Marine Betta Grouper is difficult to keep mainly because it needs special attention in order to eat. Although there may be cases where this fish will eat prepared foods, but have not yet seen. Normally they will only eat live fish about the size of a guppy or very small goldfish. The Marine Betta Grouper also need plenty of time to stalk and capture their prey. If they are in a tank with other predaceous fish, like lions and groupers, they will most likely starve because they are not fast enough to get a good share of the food. General Size Specifications:
Marine Betta Grouper is a member of the grouper group and are found in the Indo-Pacific ocean. They are widely available in the aquarium trade and smaller specimens are usually a better purchase since they more easily adapts to new environments. They can grow to be 27 cm / 11 inches in aquariums even if most specimens never reach anywhere near this length and 16 cm / 6 inches is a more common size for an adult Marine Betta Grouper. They are a hardy species if their feeding habits are meet and only seldom suffers from diseases. Habitat:
The Marine Betta Grouper are found in Indian-Pacific Ocean from Phillipines to Australia, Srilanka, fiji Islands and in Red sea. Feeding and Diet:
Marine Betta Grouper can as earlier mentioned be hard to get to eat and only occasionally accepts dead food such as frozen food, mussel, shrimps and fish fillets. They are best feed live fish or live black worms. Black worms are often an appreciated food and can be a good choice to use when trying to teach these fish to learn to eat frozen food. It is important to give them a varied diet. Their shy nature and slow feeding habits means that you will have to take special care to make sure that they get enough food. Breeding:
It is possible to breed Marine Betta Grouper fish in aquariums and aquarium breed fish are available in the aquarium trade from time to time. Tank breed fish are often of better quality and is often a better buy even if they are smaller then wild caught. It is hard to sex this species. They lay up to 500 eggs on the roof of a cave and the eggs hatch after 5 days. The fry only has a very small yolk sac and will start to eat almost instantaneously after being hatched. Marine Betta fry grows slowly and needs 7 months to adapt the adult coloration. Marine Betta fish has a relatively rough spawning act that often result in damaged finage on the parents.