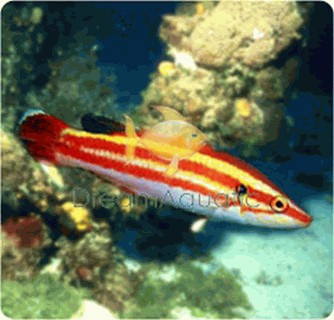 The MasudaÍs Hogfish is a brightly colored, hardy fish that is newly available to aquarium hobbyists. Also known as the Peppermint Hogfish, its size also makes it a great fish for a fish-only aquarium. It grows to only about five inches in the wild and, likely, smaller than that in captivity. In aquariums of twenty to ninety gallons, it is best kept singly. In larger aquariums, groups may be introduced simultaneously for a dramatic effect. An active fish, it does require feedings multiple times per day and plenty of swimming space. Brine shrimp, black worms, or saltwater feeder shrimp should be routinely provided to maintain best health. Maximum Size: MasudaÍs Hogfish can grow to over 3 inches in length. General Size: MasudaÍs Hogfish can grow to 5 inches in length. Minimum Tank Size Suggested: A 50 gallon or larger aquarium provides a very good environment for this species of hogfish. Tank Conditions: The MasudaÍs Hogfish should ideally be kept in temperatures between 72 and 78 degree Fahrenheit. The Ph balance of the water should also be maintained between 8.1 and 8.4 as they prefer alkaline content of the water to be high. The specific gravity should be maintained ideally between 1.020-1.025. The tank must be decorated with artificial caves and rocks; as these rock structures simulate their artificial coral reef environment. Habitat: The MasudaÍs Hogfish is mainly found in the Northern Pacific, Japan. Feeding and Diet: The diet of the MasudaÍs Hogfish consisting of meaty foods including vitamin enriched brine shrimp or mysis shrimp is preferred, as well as a high quality marine flake food.