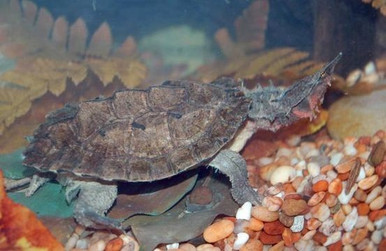 Chelus fimbriata or the Mata Mata turtle is a species of South American snapping turtle. They are endemic to the Amazon River basin and the Orinoco River. The mata-mata turtle is one of the most bizzare species of turtles that looks more or less like a pile of dried decayed leaves and wood. It has a big triangular head and an equally long neck covered with spikes, protruding scales and horns. Three barbels hang under the chin and two pairs of filamentous barbels on the upper jaw. The upper jaw is slightly hooked and a long snorkel shaped snout. The nostrils are at the end of the long snout. The black or brown carapace is oblong and can grow up to 18 inches in an adult. The flattened carapace is heavily keeled and serrated. Three parallel keels run across the length of its shell rising from each scute and ending into a knob like formation. It has a wide smiley face that matched with such a bizarre structure looks creepy .The plastron is unhinged and shorter than the carapace. Chelus fimbriata hatchlings are more colorful than the adults. They have a brown carapace with bright red and black stripes on its body. Mata-Mata Turtle Habitat Mata-Mata turtle are endemic to slow moving streams and shallow fresh water ponds, stagnant pools, marshes and swamps of Amazon River and its tributaries in Brazil, Peru, Ecuador and Colombia. The matamata is mostly an aquatic species but avoids deep water bodies. They prefer shallow water with some vegetation and plenty of debris. Its physical appearance offers a great camouflage in such an environment. The Mata-Mata turtles are adept in lazing around. Perhaps this is the reason they avoid deep water bodies. They float or sit among the debris in the water and can only be noticed when they move, and THAT is very rare. These turtles are fixed as rocks and barely ever move. They are extremely sensitive to movement in the water. When they sense a treat in the water around them they simply open their mouth and expand their neck. A low pressure is created and the treat is sucked into it along with some water. The excess water is then expelled and the fish is swallowed. At such a moment its speed will surprise you. The Mata Mata turtles are highly aquatic and prefer to spend most of their time under shallow water. A 4x4 feet 300 gallon water tank with around 8-10 inches water depth would be sufficient for a full grown male. Though they are not a very active species there should be enough space to allow free movement. 80-90 degrees Fahrenheit is the optimum temperature of their artificial habitat. The basking temperature should be around 5-10 degrees higher. A UVB light should be fitted over the basking area. Mata Mata Turtle Diet The Mata Mata turtles are aggressive carnivores and prefer to eat live meat. Live fish is the preferable delicacy. Minnows, Mollies, goldfish, guppies and sunfish are also appealing to its taste-buds. You can put several fishes in the aquarium the Matamata turtle would eat many at first and then eat only when it is hungry.