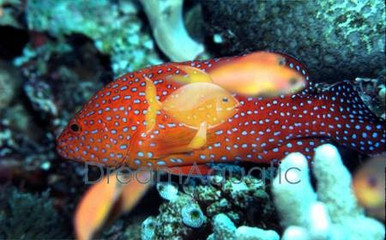 Miniatus Grouper - Cephalopholis miniata The Miniatus Grouper is bright red with iridescent blue spots on the body and head. Juveniles may lack spots or have fewer, larger spots. The Miniatus Grouper is not as frequently available as the similar Lyretail Grouper. This Miniatus Grouper, like its cousins, is a durable species that will thrive in captivity. The Miniatus Grouper, can look like a red variation of the black-colored Argus Grouper. It also resembles a combination between the Cherry Louti and the Argus Groupers. Its coloration varies greatly with chameleon-like tendencies as its surroundings vary. Its typical coloration is a red-orange with lighter broad bands running horizontally starting just behind the gill plate. The brilliant blue spots covering its body are a very notable feature. With the potential to grow to over a foot in length, the Miniatus Grouper should be kept only in larger aquariums. Also known as the Coral Grouper, in the wild Miniatus Grouper darts through the coral reefs of Northern Australia and the Indo-Pacific fulfilling its role as an opportunist predator. In the home aquarium, Miniatus Grouper has little interest in corals, but may likely dislodge corals as it darts after its next meal. Australians know the Miniatus Grouper as the Coral Trout or the Round-Tail Trout. It may eat any fish that will fit into its mouth. Crustaceans, being part of its natural diet, will likely be eaten. It welcomes a diet of smaller live fish upon which it can prey with a sudden, unexpected burst of speed and frozen krill or other meaty prepared foods. Because "high input" fish are also "high output" fish, an excellent filtration and biological system should be in place prior to introduction. Miniatus Grouper should only be kept with other aggressive carnivores such as Triggers and Eels. In the wild, Miniatus Grouper can attain sizes up to 18", but tank specimens rarely exceed a foot in length. The Miniatus Grouper is a large and very hardy fish which requires a large aquarium. It can be compatible with other fish provided they are too large to be eaten. It should not be trusted around invertebrates or small fish. A Beautiful and fairly easy to keep fish, just give Miniatus Grouper enough space and carefully consider tankmates. This is a gaudy species that will thrive in the marine aquarium. The Miniatus Grouper can be quite shy when initially introduced; over time it will spend more time in the open. Like all other members of its genus, it greedily accepts chopped fresh or frozen seafoods, other frozen preperations, and freeze-dried krill. In the wild, this reef predator commonly attacks schools of reef-dwelling fish. Since groupers are generally larger fish, it is recommended waste removal efforts be increased within the aquarium system. Feeding and Diet:
It is recommended to keep one Miniatus Grouper per aquarium, as they are prone to fight with one another. These may be kept in a shallow-or deep-water reef aquarium, but will eat crustaceans and smaller fishes. It will eat any fish it can swallow whole (including cleaner wrasses) and will behave aggressively towards tank mates that intrude on its preferred hiding places. General Size Specifications:
In the aquarium Miniatus Groupe typically does not exceed 7-10 inches. The Miniatus Grouper tends to be easily excited and caution should be exercised in quick movements around the tank for it is a reported jumper, therefore, the aquarium should be covered as best as possible at all times. Habitat:
The Miniatus Grouper range from the Red Sea to the mid-Pacific living in coral reefs looking for smaller fish upon which to dine.