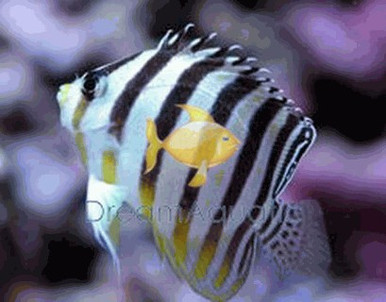 Multi-Barred Angel, Centropyge Multifasciata, or its common name, the Multibarred Angelfish is a lovely dwarf species that has zebra like markings throughout its body. This is further accentuated by touches of yellow on its mouth and lower body. Multi-Barred Angel requires a large established tank that is a hundred gallons or more with plenty of live rock. The bigger the tank and the more rock it has, the higher the chance it will survive in the long run. This is because this dwarf angelfish species is difficult to feed in captivity. As such, the organisms on the rock and substrate are what will sustain it most of the time. Barred Angelfish is a shy and secretive fish. Rarely will it wander away from the rock. Naturally found in caves and rifts on the edge of a reef. Best if kept with docile tankmates. Provide plenty of hiding places. This fish requires large amounts of live rock for grazing. Most angels are known to nip at sessile invertebrates including coral and tridacnid clams. Habitat: In the wild, Multi-Barred Angel live at incredible depths of up to two hundred feet or more. Like a number of other deepwater species, they are difficult to care for. While not very expensive, centropyge mutlifasciata is a somewhat uncommon offering in the marine aquarium trade. Origin: Quite shy, they are collected from the Western Pacific. To 5 inches. Diet: The diet of the Multi-Barred Angel Fish should consist of algae and angelfish food preparations containing various sponges. Should also be offered mysis shrimp and other meaty foods.