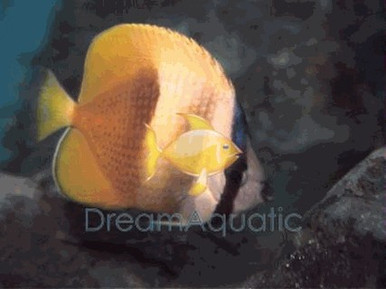 Orange Butterfly Fish - Chaetodon kleini Orange Butterfly Fish is usually touted as one of the best Butterfly Fish for a beginning marine aquarist. These fish are among the hardiest Butterflies, and can make good community fish. In the wild, most Orange Butterflies are found at depths between 45 and 50 feet (13 to 15 meters), though some inhabit shallower or deeper waters, up to about 90 feet (27 meters) deep. Normally peaceful, Orange Butterfly Fish get along well with other fish in community aquariums. Normally they will accept other Butterflies of the same species, so long as they are introduced to an aquarium simultaneously. Orange Butterfly Fish will accept a variety of foods. They may graze on live rock, and often prey on aptasia anemones that may be nuisances in marine aquariums. However, a Orange Butterfly may not necessarily be a good pest control choice for a reef environment, since many are known to eat corals. They are not considered to be reef safe. A mature Orange Butterfly normally measures about five inches (12.5 centimeters) long. It has a vertical bar through the eye that is normally a dark violet shade. A dark band located toward the front of the body divides two light yellow tinted sections. This yellow color darkens to a more golden hue, which dominates the back section of the body. The entire body of a Orange Butterfly is decorated by dark dots. It may be kept in a 50 gallon or larger aquarium with other butterflyfish, including members of its own species, if they were introduced to the tank at the same time. The A hardy, but shy species that often perishes due to too much commotion and competition in captivity. Brown or KleinÍs Butterflyfish, is a winner coming from the east coast of Africa all the way across the Pacific to the Hawaiian Islands. The diet should consist of meaty items such as fish, crustaceans, mysid shrimp, and frozen marine preparations. It needs to be fed at least three times daily Behavior:
The Orange Butterfly may act peacefully toward other fish. Maximum Size:
The Orange Butterflyfish / Chaetodon kleini grows up to 6 inches. General Size Specifications:
The small size will come to you generally 1 to 2 inches; the medium generally 3 to 4 inches; the large generally 5 to 6 inches not including the caudal fin. Minimum Tank Size:
The Orange Butterfly prefers a tank of at least 60 gallons with plenty of places to hide & swim. Water Conditions:
Keep water quality high (SG 1.020 - 1.025, pH 8.1 - 8.4, Temp. 72 - 78Á F). Habitat:
Orange Butterflyfish is found widely in tropical marine waters throughout the Indo-Pacific.Red Sea to Japan, Samoa, Hawaii, and the Galapagos Feeding and Diet:
The Orange Butterflyfish may be kept in a reef aquarium, but will eat leather corals and some of the soft corals. It is an excellent fish for beginners. The diet should consist of meaty items such as fish, crustaceans, mysid shrimp, and frozen marine preparations. It needs to be fed at least three times daily Breeding:
The Orange Butterfly Fish is an egg-scatterer.