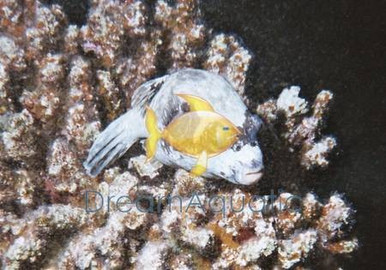 Panda Puffer - Arothron diadematus A worthwhile addition to any fish-only system, Panda Puffer derives its name due to its similarity with the Panda Bear; it sports the same black and white markings that the animal has. Nocturnal by nature, the Panda Puffer has a natural affinity towards the invertebrates and they fill the bill as its favorite food; it is also because of the fact that it needs to keep its teeth worn down. The Panda Puffer, when under threat, inflates to twice of its original size and often this becomes the cause of the Panda Puffer¥Ë_s death. Its spines are held straight out from the body under such a condition but an exposure to air while the Panda Puffer is inflating itself proves even more fatal as the air often becomes difficult to expel. The Panda Puffer belongs to the genus Arothron, and is a member of the Puffer fish family. The most popular puffer fish among the marine aquarists, the Panda Puffer gained its popularity due to their large expressive eyes, the ability to blink and their power to vocalize through their dog-like snouts, which adds to its semi-aggressive nature. But fact also remains that the Panda Puffer is a highly toxic fish like the other members of the family; it consists of a lethal poison called tetrodotoxin that is 10,000 times more powerful than cyanide that can cause deep coma, fixed non-reactive pupils, apnea, and loss of all brain stem reflexes, if death of the victim doesn¥Ë_t occur within four to six hours from respiratory muscle paralysis and respiratory failure. Being a venomous fish, the Panda Puffer has poisonous flesh. Another name for the Panda Puffer is Masked Pufferfish; recognized by its black patches around both its eyes and a lack of pelvic fins. The Panda Puffer uses its pectoral fins to move around instead. Maximum Size:
The Arothron diadematus or Panda Puffer grows up to 13 inches. General Size:
The small size Panda Puffer comes within 2 to 3 inches; the medium generally 4 to 5 inches; the large generally 6 to 7 inches. Minimum Tank Size Suggested:
The Panda Puffer requires a tank of at least 100 gallons with plenty of places to hide and swim. Tank Conditions:
A 100 gallon or larger, fish-only aquarium with a good protein skimmer is suitable for the Panda Puffer, with 72-78¥Ë_F of temperature, a specific gravity of 1.020-1.025 and a pH level of 8.1-8.4 being ideal for it. Habitat:
The Panda Puffer is found mostly in the Indo-Pacific islands of Micronesia and Samoa to East Africa, often near the coral reefs. Feeding and Diet:
Panda Puffers, being predators in the wild, accept shellfish, crustaceans and hard shelled foods such as snails as its primary diet. A large variety of all kinds of live and frozen meaty foods are best. It is best to feed small amounts several times a day. Some of the suggested frozen foods include prawn, crabs/crabs legs, bloodworms, blackworms, silversides, and mussels. Occasionally, they graze on algae as well.