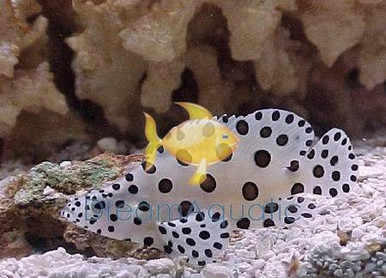 Panther Grouper - Cromileptes altivelis The Panther Grouper, also known as the Polka-Dot Grouper, is an off-white fish with polka-dots over the entire body. It is found in crevices and swims along the reefs of the Indo-Pacific, where it can attain a size of up to 20" (50 cm). The Panther Grouper camouflage the fish and act as a disrupter by breaking up the body shape so that other fish and would-be predators cannot identify it. The Panther Grouper is a very hardy and long-lived animal provided it is kept in an ample-sized, fish-only aquarium of 100 gallons or larger, with sufficient filtration. The Panther Grouper will eat any fish and invertebrates it can swallow. The Panther Grouper is a beautiful and graceful swimmer, if given enough room to do so. Panther Groupers will feed on mobile invertebrates and is best kept in an aquarium with fish its size as smaller fish will be preyed upon. Groupers are collected as food fish including the Panther Grouper in many areas of the world. The Panther Grouper yet not the most brightly colored grouper, but it does have a striking polkadot appearance. This is also one of the groupers that remain small enough to be kept in a large aquarium. Panther Grouper hover in a head-tilted-down position and their pectoral fins resemble ping-pong paddles. These fish can move quickly and are strong swimmers in short bursts. Just when you think they are resting at one end of the aquarium they can be at the other end in a wink of an eye. The Panther Grouper is not a good choice for a reef aquarium for a couple of reasons. First, they will consider small fish and crustaceans to be food that you so kindly provided just for them. Second, because they are a bottomless pit at feeding time, they also produce large amounts of wastes that make it difficult to maintain the highest water quality. When selecting tank mates to share an aquarium with a Panther Grouper, keep it in mind that they are fast eaters. The fish should be large enough that the grouper will not attempt to eat them and they should also be fast enough eaters so they can compete at mealtime. Some wrasses, tangs, angelfish and triggers can be good choices. Panther Grouper in general are more resistant to the common diseases and infections than many marine aquarium fish. However, it can be difficult to see the telltale spots caused by a Cryptocaryon irritans infection because of the PantherÍs white coloration. They seem to be tolerant of copper treatments and are good candidates for hyposalinity therapy, if the need should arise. Tank Conditions:
The Panther Grouper will spend a good deal of the time hiding in a dark spot within the aquarium. Plenty of rockwork should be provided to them in order to minimize stress and create a more natural environment. Subdued lighting is ideal for this fish. Although they can do well when kept in water a few points higher or lower, Panther Grouper seem to prefer 76-78 degrees Fahrenheit. Habitat:
The Panther Grouper are found in most parts of the Indo-Pacific Occean including Srilanka, Phillipines, Australia etc. Feeding and Diet:
The Panther Grouper is definitely a big eater. They can eat a wide variety of meaty seafood such as fish fillets, shrimp, clams, scallops and uncooked prawns. The challenge may be in getting food to the grouperÍs tank-mates before he quickly gobbles it up. Resist DonÍt feed the Panther Groupers goldfish and other freshwater species. This type of food will not provide the proper nutrients necessary to their overall health and it can lead to conditions such as fatty-liver disease. Feeding and Diet:
In the aquarium, it can be fed a number of different foods such as dried or fresh fish, squid, prawns, silversides, freeze-dried krill, or other comparable foods.