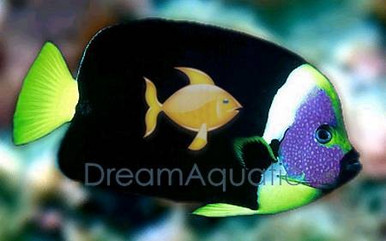 Personifer Angel Male - Chaetodontoplus personifer The Personifer Angelfish, also known as the Bluemask Angelfish, has an unusual, almost blistered appearance to its body which is generally black. The face is a drab blue-green and speckled with yellow. A swatch of yellow covers the forehead and the caudal fin is also yellow and split with a blue-green band. This is one of the few species of angelfish where the males differ morphologically from the females. In this case, the males have a slightly longer body than females. A 100 gallon or larger tank with large quantities of live rock should be provided. Not a good reef dweller, the Personifer Angelfish is prone to nip at stony and soft corals (sessile invertebrates) and clam mantles. Although a generally a peaceful angel, like most fishes, it can be pugnacious towards newly introduced fishes, especially if they are closely related. You can keep it with other angelfishes including congeners, but ideally, all should be added simultaneously to a larger aquarium, or the smaller individuals should be introduced first. Size: Personifer grows up to 14 inches. The small size will come to you generally 2 to 3_ inches; the medium generally 3_ to 5 inches; the large generally 5 to 7 inches; the XL generally 7 to 10 inches. Minimum Tank Size Suggested: The Personifer Angel prefers a tank of at least 75 Gallons. Water Conditions: Keep water quality high (SG 1.020 - 1.025, pH 8.1 - 8.4, Temp. 72 - 78Á F). Habitat:
Personifer Angelfish are found near Australia and the Barrier Reef Diet:
The Chaetodontoplus personifer is a omnivore. primarily feeds on sessile invertebrates, algae, sponges, and tunicates. should be offered a captive diet high in protein, with sponge material i.e. ocean nutrition angel formula. and likes to eat marine algae, mysid shrimp, Spirulina, sponges, and other meaty treats. Reef Compatibility:
Will do best in a fish only tank with places to hide or retreat to. Best to not mix with other angels unless you have a large tank.