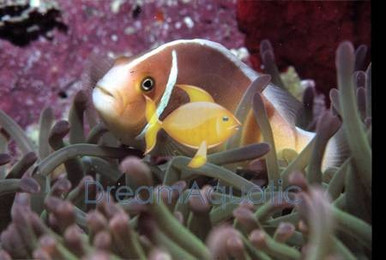 Pink Skunk Clown Fish - Amphiprion perideraion The Pink Skunk Clownfish, also known as the Pink Skunk Anemonefish, or False Skunk-striped Anemonefish, has a peach-orange base color with one white stripe behind the head that runs from the nose and down the entire length of the back. Another contrasting white stripe is located just behind the eyes. While lacking the widespread popularity of many of the more familiar members of the genus, The Pink Skunk Clownfish is nonetheless among the more readily available clownfish species. Its delicate pink coloration is unique among the group, giving it a subtle beauty that has earned it many admirers throughout the world. Although the Pink Skunk Clownfish s neither as bold nor as hardy as species such as A. ocellaris, A. clarkii, or A. frenatus, it is also less pugnacious than the majority of its congeners The Pink Clownfish can be easily identified. They are Pink to pinkish-orange in color with pale fins; unlike A. akallopisos and A. sandaracinos, this clownfish possesses a narrow white vertical headband; has a relatively narrow white stripe on top of the body that starts at the tip of the head running between the eyes, and continues along both sides of, and to the end of the dorsal fin. The Pink Skunk Clownfish are very hardy and durable fish making them a perfect addition for the novice or seasoned aquarist. If introduced to the aquarium at the same time, many varieties of tank raised clowns can be maintained together in the aquarium. Usually, the Pink Skunk clownfish are non-aggressive towards other clowns, with the possible exception of some closely related species. These fishes can be aggressive amongst each other when in numbers, therefore plenty of room and hiding places should be provided if kept in groups. This clownfish is more easily intimidated by non-related aggressive tankmates. The Pink Skunk Clownfish appears to prefer Heteractis magnifica, but inhabits H. crispa, Macrodactyla doreensis, and Stichodactyla gigantea in the wild, and may adapt to other anemones in aquariums. This clownfish will spawn and thrive well without a host anemone present. Maximum Size: Pink Skunk Clown Fish grows up to 4 inches. Habitat:
These fishes are found in Indo-west Pacific Ocean region Minimum Tank Size:
The Pink Skunk Clownfish is semi-aggressive towards conspecifics and may be intimidated by boisterous tank mates. A 30 gallon or larger aquarium with many hiding places is desirable. An Anemone host such as Stichodactyla mertensii, Macrodactyla doreensis, or Heteractis crispa is preferred to help the clownfish acclimate. Feeding and Diet:
The Pink Skunk Clownfish diet should include meaty food items such as chopped shrimp, and frozen herbivore preparations. As an omnivore, the Pink Skunk Clownfish diet should include a varied diet of meaty crustacean fares, such as finely chopped frozen or fresh table shrimp, fresh brine and mysid shrimp, as well as suitable herbivore preparations. A high quality, vitamin-enriched, color-enhancing marine omnivore flake food can be given to supplement adequate levels of nutrients. Breeding:
It will breed in an aquarium with or without an anemone host.