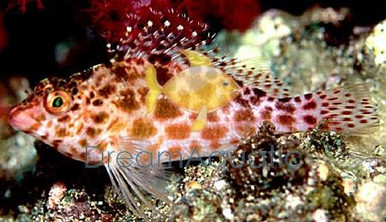 Pixy / Spotted Hawkfish - Cirrhitichyhys oxycephalus The Pixy or the Coral Hawkfish is often sold as the Spotted Hawkfish instead of the Cirrhitichthys aprinus variety; this bluish white variety with red irregularly shaped spots on the body and head is also a very hardy aquarium fish like the other varieties of Hawkfishes and aggressive as well towards its other smaller tank mates. Other color variations of the Pixy Hawkfish comprise from pale with grey to black blotches to pink with bright red blotches to pale with horizontal rows of subquadrate dark brown spots. Carnivorous by nature, the Pixy or Spotted HawkfishÍs favorite food is the bottom-dwelling invertebrates and zooplankton. Maximum Size:
For both the male and female, the maximum size goes up to 3 inches and sometimes they can reach even 5 inches. General Size:
For both the male and female, the general size goes up to 1 to 2 inches. Minimum Tank Size Suggested:
A 30-gallon or larger aquarium is acceptable for this hardy and aggressive fish. Tank Conditions:
The Spotted Hawkfish should not be kept with smaller, less aggressive species and the best is to keep one per tank unless the aquarium is sufficiently large. Structures to perch on and nooks and crannies to hide in are essential for the Spotted Hawkfish. The temperature should vary between 72 and 78_F, with a pH level of 8.1-8.4. Habitat:
Any area with rich coral growth and clear water (lagoons, channels or seaward reefs) of at least 40 m can nest the Spotted or Pixy Hawkfish; thus the Indo-Pacific region, the Red Sea and the Eastern Pacific is the place to find to find it; to be more precise, it is between Gulf of California and Colombia and the Galapagos Islands the Spotted Hawkfish can be found in galore. Feeding and Diet:
The Pixy or Spotted Hawkfish diet should include a variety of marine meats, frozen preparations and live feeder shrimp. Bottom-dwelling invertebrates and zooplankton are also its favorite food.