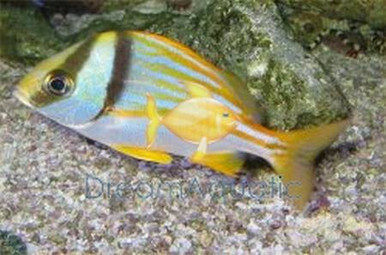 Porkfish - Anisotremus virginicus The matured or adult porkfish has yellow stripes on the body and two black bands are there. These black stripes are present on the head as well as behind the gill. The tail has a silver coloured base. The younger ones, however, look different from that of the adults. They have yellow coloured head. The front of the body is also coloured yellow. The remaining portion of the body is however white. The tail has identification marks in the form of a black spot at the beginning portion of the tail. This fish is much sought after to the aquarium hobbyists. The reasons being: first, it is a very colourful and beautiful fish and secondly, it has a non aggressive nature. This species can be kept with other saltwater fishes in an aquarium. It just needs open spaces to swim even in the captivity. However, porkfish must not be kept with aggressive species of fish as that would lead to an attack on porkfish. This species is not afraid of divers. They swim fearlessly beside the divers in the open sea. Maximum Size:
This species can grow up to 12 inches in length. General Size:
This species is generally 5-6 inches in length. Minimum Tank Size Suggested:
The water holding capacity of the tank must be a minimum of 70 gallons. Tank Conditions:
The Porkfish should ideally be kept in temperatures between 72 and 78 degrees Fahrenheit. The Ph balance of the water should also be maintained between 8.1 and 8.4 as they prefer alkaline content of the water to be high. The specific gravity should be maintained ideally between 1.020-1.025. The tank must get enough light as this species swims not in very deep water. The tank must have plenty of live coral or rock. Plants should also be there at the bottom of the tank to simulate their natural habitat. There must also be artificial caves or ledges inside the tank to provide a refuge to it. Porkfish must not be kept in a tank with crabs, snails, shrimps as the later would be eaten by it. Habitat:
Porkfish is mainly found at coral reefs almost all over the world. The places, where it is found include: Bermuda, Bahamas, Eastern and Southern Gulf of Mexico, the Caribbean and also to the South of Brazil. Feeding and Diet:
Porkfish is carnivorous in its feeding habit. It is night feeder. It basically feeds on different species of invertebrates. These include snails, worms etc. Its diet mainly consists of ophiurans but also mollusks, annelids and crustaceans. The younger ones often hide behind corals. Juveniles regularly clean parasites from other fishes.