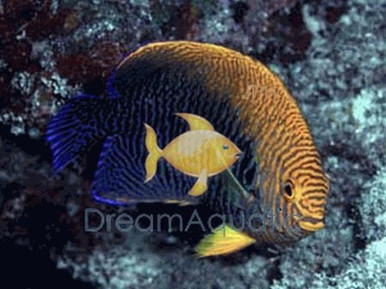 Potter's Angelfish - Centropyge potteri Noted as far back in documents as 1912, the PotterÍs Dwarf Angelfish is found in Hawaii. The PotterÍs Dwarf Angelfish is tolerant of other Dwarf Angelfish and will share territory providing suitable space is required (75 gallons or more). It is one of the more shy and secretive Dwarf Angelfish and often has difficulty adapting to captivity and a captive diet. Even though itÍs a Dwarf Angelfish, it does itÍs best in aquariums of 100 gallons or larger. The body of Potter's Angelfish is a brilliant orange, marbleized with pale to dark blue. The caudal portions of the dorsal and anal fins as well as the caudal fin are a dark blue-black. Water Conditions:
Keep water quality high (SG 1.020 - 1.025, pH 8.1 - 8.4, Temp. 72 - 78Á F).Normal temperatures for marine fish lie between 75 and 79 degrees. The Potter's Angelfish groups Up to 5 inches in size. Dwarf Potter's Angelfish Are generally available at 2-4 inches. Habitat :
Hawaiian Islands, Johnston Atoll. Specific Care Information:
Dwarf Potters Angelfish are generally peaceful fish but will often quarrel with members of their own species and even genus if they look similar enough. Though there are reports generalizing this species are reef safe, we strongly advise to add them to a reef with extreme caution. The reason for this is that many of Potter's species will behave like model citizens for a while, but one day will go after corals and clams for no reason. This may have something to do with the Dwarf Potter's Angelfish being predominately plankton eaters as juveniles. An underfed adult may attempt to try something new and find that clams and corals are it's newest favorite diet. We recommend purchasing the youngest specimen available in hopes it settles down and learns to eat a captive diet prior to learning that corals and clams are a tasty treat. It is important to provide Dwarf Potter's Angelfish with plenty of good quality cured live rock and a well aquascaped aquarium with caves, archways and overhangs to swim through or hide in. Especially if there will be more than one Dwarf Potter's Angelfish in the same aquarium. Members of the Centropyge genus are referred to as Dwarf Angelfish because of their smaller size in relation to their larger Chaetodontoplus, Genicanthus, Holacanthus and Pomacanthus cousins. Diet:
Feed a varied diet consisting of small chunks of meaty foods. These foods include krill, raw table shrimp, squid, clam and mussel. It is also a good idea to occasionally supplement with some type of herbivore diet. Breeding and Propagation:
PotterÍs Angelfish is hermaphroditic, difficult to breed, and there are no distinguishing characteristics to help differentiate males from females.