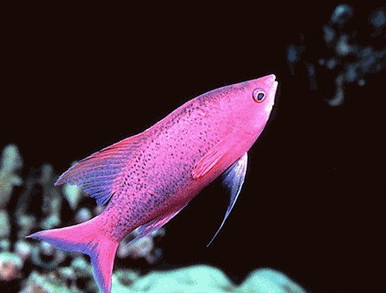 Purple Queen Anthias - Mirolabrichthys tuka Purple Queen Anthias, Pseudanthias tuka, is commonly found in the Indian and Pacific Oceans. Anthias are also commonly called Fairy Basslets in some parts of the country. Their gorgeous flowing fins no doubt inspired the Fairy reference and the Basslet portion of the name recognizes that they are the little cousins of Sea Basses and Groupers. Predominantly bright purple, this color is accentuated by an orange band that extends from the tip of the nose to the base of the pectoral fin. Because of their small size, they do not pose a threat to other fish and make wonderful reef inhabitants. A typical meal for an Anthias is comprised of zooplankton and small animals such as Brine Shrimp and copepods. In the wild, Anthias form large schooling groups on the reefs. A single male will claim part of the reef as his and fight off other males that try to invade. The other Anthias present are juveniles and females, which the male keeps a watchful eye on. For aquariums, the females should be introduced first and a male at a later date. As is true with most Anthias species, they swim in the middle of the tank environment but appreciate plenty of caves and hiding places. If keeping a group of Purple Queen Anthias, it is best to have one male with several females in a 500 liter (125 gallon) tank. If kept alone, a 150 liter (40 gallon) tank is sufficient. A difficult specimen to keep, the Purple Queen may refuse to eat and become invaded by bacteria or parasites as a result of malnutrition and stress. Maximum Size: The Purple Queen Anthias grows up to 7 inches. General Size Specifications:
Arrival Size for Anthias: Small: 1.5 to 2.5 in.; Medium: 2.5 to 3.5 in.; Large: 3.5 to 6 in. Minimum Tank Size Suggested: The Purple Queen Anthias prefers a tank of over 125 gallons Water Conditions:
Keep water quality 72-78ÁF; sg 1.020-1.025; pH 8.1-8.4; dKH 8-12 Habitat:
Purpule Queen Anthias are found near Indo-West Pacific: Mauritius to the Philippines and Bali (Indonesia) to the Solomon Islands, south to Rowley Shoals and the Great Barrier Reef; Palau in Micronesia. Reported from southern Japan. Found primarily on continental reefs. Diet:
The diet is consistent with other members of the Anthias group - zooplankton and floating filamentous algae. In the aquarium, it should be fed a varied diet of mysid shrimp, vitamin-enriched brine shrimp, frozen preparations and other meaty items for zooplankton feeders. They prefer to be fed small quantities, several times daily.