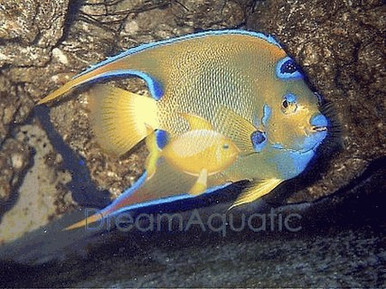 Queen Angelfish - Holacanthus ciliaris The Queen Angelfish is found on the coral reefs of the Western Atlantic Ocean. They are usually found alone or sometimes as a pair. They can get quite large, up to 18 inches (45 cm) and are not recommended for the saltwater beginner simply because most folks don't have a large enough tank to keep them in. You would need at least a 200 gallon tank to adequately care for them! The coloration and markings on the Queen Angelfish as a juvenile are very different from the adults. Juveniles have a darker body with white vertical bars towards the back of the body. They lose these bars as adults and develop a sort of "crown" on top of the head, which is probably why they have the common name "Queen Angelfish". The dorsal and anal fins will grow past the tail fin (caudal fin). They can be relatively hardy once acclimated into a well established, large tank that is 6 months or older. Since this fish is quite expensive you don't want to add them to a new tank going through the nitrogen cycle or one without sufficient amounts of live rock. Live rock may provide grazing opportunities for them in between meals as well as hiding places to help make them feel more secure. Don't plan on keeping multiple Queens in the same tank or territorial aggression may ensue. They may also pick fights with other Saltwater Angelfish species, but that may be less likely. Be prepared to separate them if necessary. The biggest issue you'll most likely encounter is feeding them. In the wild they mostly eat sponges. This can be near impossible to reproduce in the home aquarium, but fortunately we can buy frozen marine foods containing sponges. In fact, there are frozen cube packs now made especially for saltwater angelfish and butterfly fish. Try to supplement their diet with dried marine algae and/or vitamin enriched herbivorous fish foods. This fish is usually the show piece or prized specimen for hobbyists with the right tank setup and they are truly an awesome fish. Life Span: 15 - 20 years, possibly longer Habitat: The Queen Angelfish are found at Western Atlantic, Gulf of Mexico, Caribbean to Brazil, South America. Diet:
In the wild this fish primarily eats sponges and sometimes marine algae, spirulina and dried marine algae needs to be fed to them. Look for angelfish foods with sponge matter included. Sanfrancisco Bay Brand has frozen cube packs made especially for Angel fish and Butterfly fish. Gender:
It can be hard to tell the difference between adult male and female specimens. Males may grow to be larger.