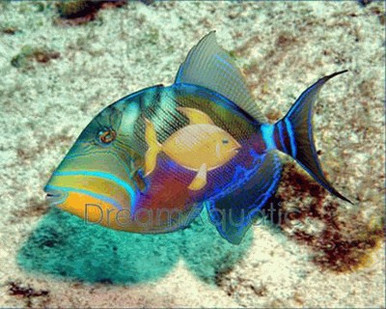 The Queen Triggerfish is a large triggerfish species found in the tropical the Eastern Atlantic ranging south to southern Angola, Western Atlantic, from the northern Gulf of Mexico to southeastern Brazil. Queen Triggerfish can reach an impressive 2 feet in length and are very powerful swimmers that will require a large aquarium with adequate swimming area. They are commonly found along rocky or coral areas and sometimes in underwater grass flats, where they can be found either in schools or solitary. In the wild they tend to prey mostly on urchins, starfish and other similar prey, but will eat small fish when opportunities arise. Queen Triggerfish are very bold feeders and are hardy and easy to keep, if kept in a very large aquarium (300 gallons and up for adults) with very good filtration and water movement. Queen Triggerfish have a base color of light yellow with green and blue markings on the body, with yellow and bright blue accents on the head and fins. There are two broad diagonal curved bright blue bands running from the snout to below and in front of pectoral fins, the lowermost continuous with a blue ring around lips; a broad blue bar across caudal peduncle, and blue sub-marginal bands in median fins. Their eyes are set high on either side of their head to allow them to scan for prey, and they have a small but powerful mouth with very strong teeth. Like all Triggerfish, they have the ability to lock their dorsal spine in an upright position, which they use to lock themselves in rock crevices and as defense against larger predatory fish species that might try to eat them. Queen Triggerfish are a very hardy aquarium species when kept in large aquariums (300 gallons plus as an adult), that do well in many aggressive fish-only setups. They are more aggressive than most Triggerfish species, especially as they grow larger, thus should only be kept with other Triggerfish species in a very large aquarium capable of producing enough territory for each Triggerfish. They can be kept with most any other large semi-aggressive to aggressive fish species that is similar in size to the Queen Trigger, with the exception of most sharks species seen in the aquarium hobby, as they will often pick at their fins. Queen Triggerfish need to be provided with both large amounts of live rock & aquascaping and large open areas for swimming. While they can intially be kept in smaller aquariums, adults of this species will need very large aquariums with excellent filtration and water movement. Strong biological and mechanical filtration is important, as Triggerfish tend to be messy eaters and can put a strain on aquarium filter systems. They should not be kept with invertebrates or crustaceans as they will eat them, and can also be destructive to some coral species. Queen Triggerfish are a carnivorous species that will eat a variety of meaty foods from invertebrates and crustaceans to live fish. Ideal food for this species in the aquarium envrionment includes chopped fish, squid, shrimp, mussels and other similar meaty foods along with quality pellet or frozen marine meaty preparations. They will also feed on ornamental shrimp, crabs and snails along with some corals and sessile invertebrates, so they should not be kept with these species unless they are intended as a food source. Maximum Size: Queen Triggerfish grows up to 9 inches in length. General Size: Queen Triggerfish generally comes in size varying between 4 to 8 inches. Minimum Tank Size: A 125 gallon or larger aquarium with rocks and caves provides a good habitat. It will rearrange the landscaping and rocks as it wanders in and out of the caves. Habitat: The Queen Triggerfish is a little rarer on the West Coast since fish from the Atlantic are not shipped as often. The Queen Trigger is a beautiful fish that can become hand tamed in time. Watch your fingers though, the front teeth are very sharp and can deliver a painful bite! Tank Conditions: The Queen Triggerfish should ideally be kept in temperatures between 72 and 78 degrees Fahrenheit. A pH value of 8.1 or 8.4, and a specific gravity of 1.020 to 1.025 should be maintained. When kept with invertebrates, the specific gravity range should be 1.020 to 1.025, for the invertebrate species. In a fish only aquarium, the specific gravity should fall between 1.020 and 1.023. Reef Tank Compatibility: Because these fish eat a wide variety of crustaceans and invertebrates, they are not considered suitable in live rock or reef aquariums that may have these types of marine life present. Diet and Feeding: The Queen Triggerfish needs a varied diet of meaty foods including; squid, krill, clams, small fish and hard shelled shrimp to help wear down their ever growing teeth.