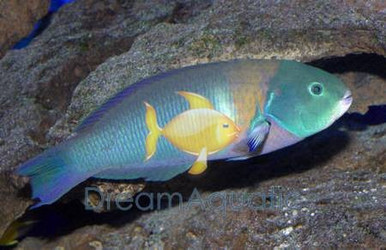 The Saddle Wrasse is endemic to Hawaii. It is one of the most numerous and common fish in those waters. It can be distinguished not only by its color but by its characteristic swimming pattern, beating its pectoral (side) fins up and down in a "flying" motion. The Jansen Saddle Wrasse is also known as the Saddleback Wrasse or Jansen's Wrasse. As an adult, it has a light blue to white body with five to six vertical dark, thick stripes that are bordered in yellow. These vertical stripes develop and spread apart as the fish matures. They are a beautiful species that makes a wonderful addition to a semi to aggressive saltwater fish only aquarium. A beautiful hardy fish that is easy to care for, the Saddle Wrasse makes a wonderful addition to the right marine aquarium. It gets rather large and is very active during the day, enjoying a lot of rockwork with nooks and crannies for retreating as well as for sleeping at night. Though quite social in its natural environment it gets aggressive in captivity, especially as it ages. Like all the Thalassoma Wrasses, the Saddle Wrasse enjoys resting on a sandy substrate and may burrow into it when frightened. This wrasse doesn't bother corals, but it will eat crustaceans, invertebrates, and even smaller fish. With these things in mind, provide a large aquarium with plenty of rockwork, a sandy bottom, and large tank mates that can hold their own. Maximum Size: Saddle Wrasse can reach up to about 11.5 inches. General Size Specifications: Saddle Wrasse only grow to about 6 or 7 inches. Minimum Tank Size: Saddle Wrasse prefers a tank of at least 100 gallons in size to provide plenty of living and swimming room for these fish. Water Conditions: Keep water quality high (SG 1.020 - 1.025, pH 8.1 - 8.4, Temp. 72 - 78Á F). Habitat: The Saddle Wrasse was described by Quoy & Gaimard in 1824. They are found in the Eastern Central Pacific, endemic to the Johnston and Hawaiian Islands at depths of 16 to 98 feet (5 - 30 meters). Inhabiting areas from shallow coastal regions to the outer reefs, they enjoy sand bars for quick getaways. They are often found singly or in small groups consisting of females with one dominant male. Maintenance Difficulty: Easy beginner fish for a large aquarium. Generally not considered totally reef safe as it will eat most of your small crustaceans and invertebrates, though it will not bother your corals. Housed with other aggressive species at least the same size or with larger fish. The Saddle Wrasse becomes more aggressive as it ages. Feeding and Diet: The Saddle Wrasses are carnivorous, in the wild they eat benthic animals such as worms, shells, molluscs, brittlestars, shrimps, and other crustaceans . Having very hearty appetites, they are easily trained to eat prepared foods in the aquarium. Feed a varied protein diet strong in small crustacea, formulas and frozen foods such as mysis and brineshrimp, and even flake foods. They are heavy eaters that will eat anything and need to be fed 2 or 3 times a day.