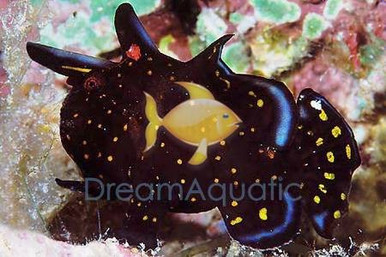 Sargassum Fish - Histrio histrio The Sargassum Fish is a member of the Antennariidae family. With a body of mottled brown and tan, several projections give it more of an ornate rock-like appearance than that of a fish. The Sargassum Anglerfish can be recognized by its body shape, dorsal fin structure, colour and presence of skin flaps and filaments. Unlike most other shallow-water anglerfishes (family Antennariidae) the skin of the Sargassum Anglerfish is smooth rather than prickly. This fish has a dorsal fin divided into four parts. The most anterior part is the "fishing rod and lure" comprising the illicium and esca. This is followed by two separate spines and finally by a long-based soft-rayed portion. The Sargassum Anglerfish varies from pale cream to greenish or dark brown. It has an irregular pattern of blotches and spots. One of the more popular Anglers for its looks, the Sargassum Fish is a master of camouflage in its habitat, and can change from light to dark in coloration. Commonly found in amongst the Sargassum Algae, the Sargassum Fish completely mimics the Sargassum Algae with folds and tufts of skin. The Sargassum Fish is a much more aggressive Angler in that it will try to swallow prey 2 to even 3 times its own size, making this fish easier to place with larger predatory fish i.e. Lionfish, smaller grouper species, Snappers, and small Sharks and Rays. The Sargassum Fish juveniles and adults usually live closely associated with floating algae. Adults are sometimes seen swimming under clumps of floating Sargassum weed. When threatened by a predator the Sargassum Anglerfish sometimes jumps out of the water onto the top of an algal mat. It may stay out of water for some time. Size:
The Sargassum fish grows upto length of 8 inches. The small size will come to you generally 1 to 2 inches; the medium generally 3 to 4 inches; the large generally 5 to 6 inches not including the caudal fin. Minimum Tank Size Suggested:
The Sargassum Fish prefers a tank of at least 30 gallons with plenty of places to hide & swim. Water Conditions:
The water quality should be kept high with sp. Gravity ranging between 1.020 and 1.025, pH ranging between 8.1 and 8.4 and moderate temperature. Tank Conditions:
The Filefish requires a tank with plenty of swimming space and live rock for hiding and grazing and should be housed with other peaceful fish. It may be aggressive towards other filefish and should be kept as a single specimen or as a male-female pair. Habitat:
The Sargassum Fish is distributed along Indian Ocean from tip of South Africa eastward to Indian and Sri Lanka, including the Red Sea, Madagascar, Reunion and Mauritius; In Western Pacific from Hokkaido to tropical Australia, including Taiwan, Philippines, Moluccas, southern Papua New Guinea, Guam, Tonga, New Caledonia and New Zealand; Mariana Is. in Micronesia. Their occurrence in the eastern Pacific remains problematic. In Western Atlantic along Gulf of Maine to the mouth of the Rio de la Plata, Uruguay. In Eastern Atlantic from Azores and off West Africa Feeding and Diet:
The Sargassum Fish feeds by ambush, lying in wait for an unsuspecting fish or crustacean to go by and then lunging forward, grabbing and swallowing the victim whole. The Sargassum Fish has been known to devour fish nearly equal to its own size. A diet of feeder fish and shrimp should be provided. Do not overfeed as the Sargassum may stop feeding.