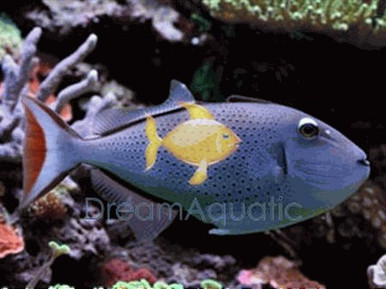 The Sargassum Trigger is one of the least aggressive Triggers available. Unlike most Triggerfish, this species will not bother corals or sessile invertebrates such as anemones, clams, and sponges. This trigger is not known to harass other tankmates, but should be kept with similar sized fish with similar temperament as well. The Sargassum Trigger vocalizes using grunting sounds, and is found in the wild around Sargassum weed. Sargassum Trigger is a one of the least aggressive of the triggerfishes, and one of the few triggers that can be kept in the reef aquarium. It will not bother corals and usually ignore sessile invertebrates. It can be kept with moderately-aggressive tankmates and can even be kept in groups in extra large aquariums. This trigger rarely bothers its tankmates. Like many triggers, it is often shy when first added to the aquarium, but becomes bolder as it learns to associate its caretaker with food. It prefers lots of open swimming space and brisk water movement. Juveniles associate with rafts of Sargassum weed (hence the common name). Also known as Red Tailed Triggerfish (large males have some red on the edge of the tail.) The Sargassum Trigger has a rounded head and relatively small mouth. Its body is light blue-grey with three dark stripes on the cheeks, and dark spots arranged in rows covering its body. Maximum Size: Sargassum Trigger grows up to 12 inches in length. General Size: Sargassum Trigger generally comes in size varying between 4 to 8 inches. Minimum Tank Size: A 40 gallon or larger aquarium with rocks and caves provides a good habitat. It will rearrange the landscaping and rocks as it wanders in and out of the caves. May eat smaller tank mates as well a variety of invertebrates. Tank Conditions: The Sargassum Trigger should ideally be kept in temperatures between 72 and 78 degrees Fahrenheit. A pH value of 8.1 or 8.4, and a specific gravity of 1.020 to 1.025 should be maintained. When kept with invertebrates, the specific gravity range should be 1.020 to 1.025, for the invertebrate species. In a fish only aquarium, the specific gravity should fall between 1.020 and 1.023. Reef Tank Compatibility: Because these fish eat a wide variety of crustaceans and invertebrates, they are not considered suitable in live rock or reef aquariums that may have these types of marine life present. Diet and Feeding: The Sargassum Trigger needs a varied diet of meaty foods including; squid, krill, clams, small fish and hard shelled shrimp to help wear down their ever growing teeth.