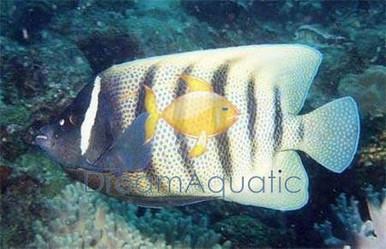 Six Bar Angelfish - Pomacanthus sexstriatus The Six Bar Angelfish is alternately referred to as the Sixbanded Angelfish or Six Striped Angelfish. As an adult, the primarily pale-tan body has five nearly evenly-spaced dark brown stripes. The sixth stripe is white and just behind the eye. Dark blue polka-dots cover the entire body, while vibrant sapphire-blue dots cover the caudal fin and back portion of the anal fin. The Six Bar Angelfish is known by divers and aquarists to grunt in warning when approached. In the wild, Six Bar Angels are quite omnivorous. They have been known to eat fish eggs, sponges, worms, and mollusks, among a number of other foods. In captivity, a varied diet is also important. One of the larger Angels offered in the pet trade, Six Bar Angels are often considered the hardiest species of Euxiphipops. This does not mean, however, that they are hardy compared to other saltwater fish or even other Angels, or that they should be kept by beginners. Many experienced aquarists consider keeping a Six Bar Angel to be a rewarding achievement. A large aquarium and hiding places are important for stress reduction. Good water quality is also important; in fact, it is reported that Six Bar Angels may brighten in color after water changes. Six Bar Angels normally do not get along well with other large Angels. They may also nip at the mantles of tridacnid clams, or nibble at hard and soft corals. For this reason, they are not considered reef safe. Because of their tendencies to graze on algae in their enclosures, Six Bar Angels should be introduced into well-established aquariums. The Six Bar Angel can grow to about 18 inches (46 centimeters) in length, though most captive fish grow to about 12 inches (30 centimeters). As their name suggests, young Six Bar Angels are boldly marked with six light colored vertical bars. Mature specimens have black or brown bars over a lighter basic coloration, ranging from silver white to cream colored. Often, blue dots may speckle the entire body, obscured by the bands. Habitat:
Six Bar Angels are native to the western Pacific Ocean. They are often seen and collected in Australia, the Solomon Islands, the Philippine Islands, Indonesia, Sri Lanka, and Singapore. Specific Care Information:
A single Six Bar Angel should have an enclosure of at least 100 gallons. The temperature should remain between 75 and 78 degrees Fahrenheit (24 to 26 degrees Celsius). The pH level should remain at 8.3 or 8.4. The specific gravity should be between 1.020 and 1.025. The lower end of this range, below 1.023, would be appropriate for a single fish. However, because invertebrates require higher salinities, a Six Bar Angel kept with these animals should have a specific gravity between 1.023 and 1.025. Six Bar Angels should be allowed plenty of hiding places. They normally do not get along well with other Angels of the same species, or with similar species. In a reef aquarium, Six Bar Angels may nibble on hard and soft corals or tridacnid clams. The most important aspect of a Six Bar Angel's diet is variety. Often, people offer mysid shrimp, various seaweeds, squid, shellfish, sponges, and numerous protein items. Many Six Bar Angels will also graze on algal growth in their enclosures. In order to ensure an easier transition into a captive environment, it is best to acquire a Six Bar Angel that is not too large. Usually a young, though not tiny, specimen has the best chances of adapting to your aquarium. Diet:
The diet of the Six Bar Angelfish should include Spirulina, marine algae, high-quality angelfish preparations, mysid or frozen shrimp, and other meaty items. It should be fed at least three times a day. Breeding and Propagation:
The Six Bar Angelfish are hermaphroditic, difficult to breed, and indistinguishable in color from male to female.