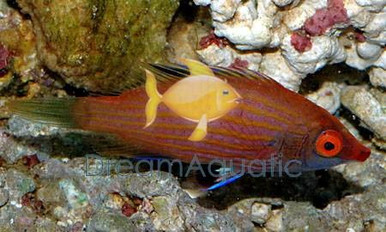 Six Line Wrasse - Pseudocheilinus hexataenia The Six Line Wrasse is also referred to Sixstripe Wrasse. It has six, horizontal distinctive blue lines lying against an orange background. The cheek is orange with numerous tiny yellow dots. The caudal fin and caudal peduncle are green. When courting, the male will display increased color intensity. Six Line Wrasse is a saltwater species that are found in an area stretching from Red Sea south to Natal, South Africa and east to the Tuamoto Islands, north to the Ryukyu Islands, south to Lord Howe and the Austral islands. Six Line Wrasse is also found in St. Brandon's Shoals and Gulf of Tadjoura. The care level for Six Line Wrasse is easy and hence is suitable for moderately experienced aquarist. Six Line Wrasse requires a 30 gallon or larger aquarium with a generous supply of hiding places and live rock in which to forage for food. The Six Line Wrasse are reef safe. And usually, they donÍt cause any damage to corals. Six Line Wrasse will search for live foods in the form of small crustaceans such as pyramidellid snails (clam parasites), urchins, and commensal flatworms. Six Line Wrasse are also known to feed on unwanted pests on live rock, such as bristle worms When first introduced into the aquarium, live saltwater feeder shrimp should be used to entice this fish to eat. The diet should consist of finely chopped meaty foods and occasionally vitamin-enriched frozen preparations Six Line Wrasse may act aggressively towards peaceful Wrasses and other fish that are easily intimidated. It may attack smaller tank mates and is best kept with larger or more aggressive fishes. May shred fins and remove scales while harassing smaller fish with it is large canine teeth. Six Line Wrasse is best kept as single. A single male can be kept with a group of females that are introduced prior to or at the same time as the male. Maximum Size:
The Six Line Wrasse grows up to 3 inches. General Size Specifications:
The small size will come to you generally 1 to 2 inches; the medium generally 3 to 4 inches; the large generally 5 to 6 inches Minimum Tank Size:
The Six Line Wrasse prefers a tank of at least 20 gallons with plenty of places to hide & swim made in gravel and sand. Water Conditions: Keep water quality high (SG 1.020 - 1.025, pH 8.1 - 8.4, Temp. 72 - 78Á F). Habitat:
Range: Fiji Feeding and Diet:
The Six Line Wrasse is a carnivore and likes to eat chopped meats, small invert (amphipods & foraminiferans), live feeder shrimp, worms.