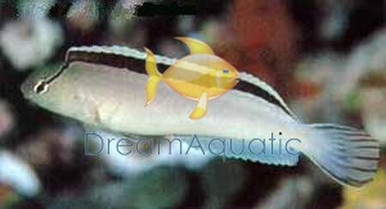 Smith's Fang Blenny - Meiacanthus smithii The Smith's Fang Blenny is also referred to as White's Blenny, Smith's Blenny, or Disco Blenny. Its body is mostly blue with a black stripe which starts at the chin and runs through the eyes and down the dorsal fin. It tends to do well in an aquarium if provided with live rock in a 30 gallon or larger aquarium. The live rock provides places to hunt and feed on small crustaceans as well as places to hide. It is not usually aggressive unless the tank mates appear to have a similar shape as it does. Its fangs are more of a defense mechanism used for biting an aggressive fish back. The Smith's Fang Blenny, like the Forktail Blenny, and the Canary Blenny is commonly found swimming in the currents of Lagoons and Seaward reefs, feeding on Zooplankton. The Smith's Blenny is compatible with either a reef aquarium or a community aquarium, and mixes well with other fish, except other Blennys, of the same body type.Caution as bite from this fish is slightly toxic. If bitten seek medical advice, especially if diabetic, anemic or suseptible to allergic reactions. The Smith's Fang Blenny diet consists of chopped crustaceans, vitamin-enriched brine shrimp, and frozen food preparations for herbivores. Maximum Size:
The Smiths Fang Blenny Grows Up to 3 inches General Size Specifications:
The small size will come to you generally 1-1/2 - 3-1/2 inches not including the caudal fin. Minimum Tank Size Suggested:
The Smiths Fang prefers a tank of at least 30 gallons with plenty of places to hide & swim. Water Conditions:
Keep water quality high (SG 1.020 - 1.025, pH 8.1 - 8.4, Temp. 72 - 78Á F). Habitat:
The SmithÍs Fang Blenny is found near Sri Lanka, Western Indo- Pacific to northern Sri Lanka, and western Java Sea. Reported from southeast India. Feeding and Diet:
The Smith's Fang Blenny diet consists of chopped crustaceans, vitamin-enriched brine shrimp, and frozen food preparations for herbivores.