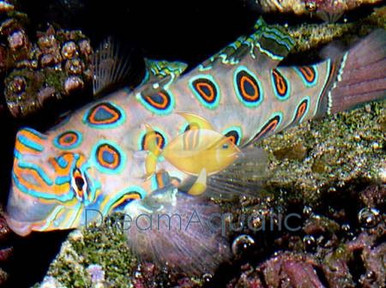 Spotted Mandarin Goby Fish - Synchiropus picturatus The Spotted Mandarinfish, also referred to as the Spotted Mandarin, Psychedelic Mandarinfish or Picture Dragonet, was first found in the Western Pacific Ocean in 1976 by Peters. The head, fins, and body are a psychedelic combination of blue, orange, and black spots on a green base. Males may be distinguished from females by their more-elongated first dorsal spine. The male Spotted Mandarins can be distinguished from females by the presence of a greatly elongated spine at the forward edge of the dorsal fin. Females have a small, unadorned dorsal fin. You can keep several individuals of both mandarin species together in the same tank as long as there are not two males of the same species, which will fight bitterly. The Spotted Mandarin Goby is a high maintenance fish. The Spotted Mandarin Goby may act peacefully toward other fish. The Spotted Gobies may sometimes attempt jump out. It is the most colourful of commonly found fish for marine aquarium enthusiasts. Its appetite is not the easiest to satisfy. It is often easier to teach them to accept prepared foods with patience and work. Unfortunately, this fish normally dies as it is often purchased and kept in under established tanks without enough food to consume. The death from starvation normally occurs within six months. Size:
The Spotted Mandarinfish can maximum grows upto 5 inches. The usual size found is upto 3 inches. The small size will come to you generally 1 to 1_ inches; the medium generally 1_ to 2_ inches; the large generally 2_ to 4 inches Water Conditions:
The high quality water with moderate temperature and specific gravity ranging between 1.020 and 1.025 and also pH between 8.1 and 8.4 is required for the Spotted Mandarin Gobyfish Tank Conditions:
The Spotted Mandarinfish requires a 30 gallon or larger aquarium with live substrate and plenty of hiding places. It is moderately hardy in reef aquariums if given special care. It is not overly aggressive towards other fish, except for conspecifics. The Spotted Mandarin should not be kept in anything but a well established Reef tank (6 months or more) of no less than 75 gallons with a refugium as it primarily feeds on copepods. Habitat:
Should be kept in a well established aquarium with live substrate and plenty of hiding places. This fish will starve in a new or barren tank. Do not keep in a tank with anemones as they will eat this fish. This fish may bury itself in the sand at night or when threatened so a "soft" substrate works best to prevent injuries to the fish. It is found near Western Pacafic. Feeding and Diet:
The Spotted Mandarinfish Goby is a carnivore and likes to eat May learn to accept mysis shrimp and flakes with time and patience. The diet of Spotted Mandarinfish should consist of a variety of live vitamin-enriched brine shrimp and live black worms. It will eat natural prey off live rock and live sand.