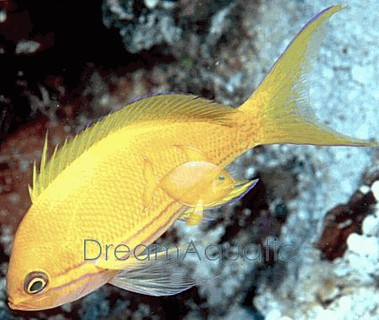 Squarespot Anthias - Pseudanthias pleurotaenia Squarespot Anthias As the name implies, the males of this species have a large pink spot or square on the side of the body. The females are orangeish and lack the square blotch of the male. Squarespot Anthias species should be housed in a large aquarium with plenty of swimming room. Acclimation is often slow; your specimen may hide for a week or more before you even catch a glimpse of it. However, in time it will usually come out of hiding and accept live and prepared foods. Juveniles and smaller females (under 3.9 inches) adjust more readily to aquarium confines. Only one individual should be kept per aquarium, unless the tank is large. Even then you should only keep one male per tank and six or more females. These fish may also behave aggressively toward other zooplankton feeders. The color of this fish often fades in captivity, especially if it is not given a varied diet, including foods with added pigments. This species, and some of the other anthias, are prone to jumping out of open aquariums. Provide clean, well oxygenated water, along with plenty of water movement and open swimming space. Maximum Size: Squarespot Anthias grows up to 7.9 in (20 cm) General Size Specifications:
Arrival Size for Anthias: Small: 1.5 to 2.5 in.; Medium: 2.5 to 3.5 in.; Large: 3.5 to 6 in. Minimum Tank Size Suggested: The Squarespot Anthias prefers a tank of over 125 gallons Water Conditions:
Keep water quality 72-78ÁF; sg 1.020-1.025; pH 8.1-8.4; dKH 8-12 Habitat:
Squarespot Anthias are found near Pacific Ocean: Indonesia to Samoa, north to Ryukyu Islands, south to Rowley Shoals and New Caledonia throughout Micronesia. Diet:
The dietof Squarespot Anthias is consistent with other members of the Anthias group - zooplankton and floating filamentous algae. In the aquarium, it should be fed a varied diet of mysid shrimp, vitamin-enriched brine shrimp, frozen preparations and other meaty items for zooplankton feeders. They prefer to be fed small quantities, several times daily. Breeding:
SquareSpot Anthias species all share the trait of being hermaphroditic. If a dominant male perishes, the largest female of the group will often morph to take its place.