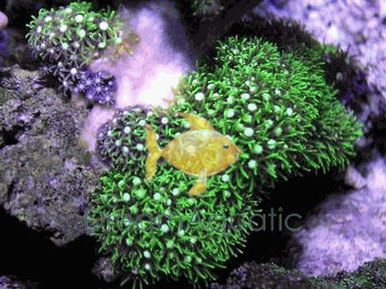 Star Polyps - Clavularia species Star Polyps are one of the striking corals that can evolve the look of your aquarium considerably. Quite easy to handle with not many specifications, Star Polyps are a popular choice amongst all the marine aquarium hobbyists across the board. The ensuing discussion gives you further insight on Star Polyps. Other names:
The scientific name of Star Polyps is Clavularia species. Star Polyps are also commonly known as Encrusting Polyps due to their nature of encrusting over anything that comes in their way while spreading. Waving Hand Polyps is another common name of Star Polyps. This name is derived due to the wonderful sight of Star Polyps when their polyps wave with the water movement. The Star Polyps of green variety are called Clavularia or Briareum viridis while, the silver variety of Star Polyps is called Clavularia or Briareum species. Color:
Star Polyps are generally found in two colors, green and silver. Morphology:
Star Polyps have an encrusted base of purple color with many polyps emerging from it. Each polyp is brightly colored, long, narrow and has tentacles sticking out at its tip. The polyps together form a crown like structure. The crown of polyps looks very beautiful when it sways with the water current. Star Polyps grow rapidly. New polyps emerge with the spreading base. Breeding:
Star Polyps grow and breed fast in a marine aquarium, if they get the required environmental conditions therein. They reproduce asexually through fission. Each resulting fragment grows into an individual Star Polyp. Growth environment in your marine aquarium: