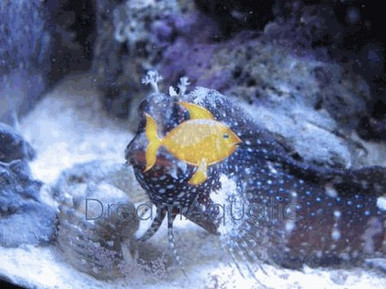 The Starry Blenny is also referred to as Snowflake Blenny. Its body is a mottled dark brown with white dots and its pectoral and tail fins are yellow. A well-established 30 gallon or larger aquarium with multiple swimming levels and plenty of rock is a suitable environment. It is not usually aggressive unless the tank mates appear to have a similar shape as it does. It is best to house singly unless kept in a larger tank and the two are a mated pair. It tends to perch and hop from rock to rock looking for microalgae to graze on. The Starry Blenny does best in well-established aquariums with large amounts of natural algae to feed on. The diet can be supplemented with vegetable matter, Spirulina, and herbivore preparations. Maximum Size: The Starry Blenny Grows up to 5.5 inches. Origin: The Starry Blenny is a herbivore, peaceful blenny that lives in Cebu. Diet: The Starry Blenny feeds on algae, provide a varied diet that includes frozen preparations for herbivores. Its diet can be supplemented with vegetable matter, including frozen and dried foods containing marine and blue-green algae.