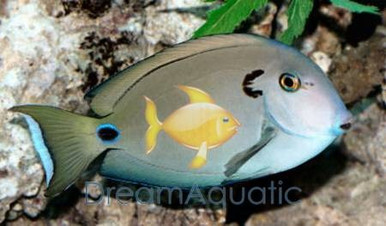 Tennenti Tang, Acanthurus tennenti, is an extraordinarily unique Tang whose understated beauty is not commonly recognized. This is one of the Tangs that undergoes a change in coloration from juvenile to adult stages. The juvenile is a deep yellow-gold, while the adult displays the distinctive coloration as seen pictured. Relatively peaceful, it will tolerate other types of Tangs, but should be the first one in the aquarium. It requires plenty of swimming room and will need to have its diet supplemented with fresh zucchini, broccoli and spinach. It is reported to be a voracious filamentous ñhairî algae eater and is considered to be reef safe. This surgeonfish is one of the few surgeonfish with a beautiful but changing coloration from juvenile to adulthood. The vibrant coloration on its caudal peduncle surrounding the spine makes it is easy to determine the source of the common name ' Spinecircle Tang'. However the most used common names, 'Doubleband Surgeonfish' and 'Lieutenant Surgeonfish', are derived from the black mark just above the pectoral fin which develops into two short dark stripes in the adult. The Doubleband Surgeonfish is a good choice for the home aquarium. They go through an interesting color change from juvenile to adult and are favored because they don't get as large as many others in the same genus. They are moderately easy to care for as long as they are provided with a good environment and their nutritional needs are met. Like all surgeonfish and tangs, the Doubleband Surgeonfish likes lots of water turbulence rather than a placid aquarium. Be sure there is lots of swimming room and plenty of rocks/ corals with nooks and crannies to hide in. It is not too picky about foods once it gets settled, and like most surgeonfish this can be accomplished by initially offering a good macro algae. A voracious algae eater, it can be also be kept in a reef environment. They can be kept with a variety of tank mates including some of the other genus' of surgeonfish, though they will be aggressive towards others of their own kind. Maximum Size: Tennenti Tang grows to 9 inches in length. General Size: This Tennenti Tang is about five to eight inches in length. Minimum Tank Size Suggested: A 50 gallon or larger aquarium provides a good environment for these Tennenti Tang. Tank Conditions: The Tennenti Tang should ideally be kept in temperatures between 72 and 78 degrees Fahrenheit. A pH value of 8.1 or 8.4, and a specific gravity of 1.020 to 1.025 should be maintained. When kept with invertebrates, the specific gravity range should be 1.020 to 1.025, for the invertebrate species. In a fish only aquarium, the specific gravity should fall between 1.020 and 1.023. Feeding and Diet: The Tennenti Tang or Lieutenant Surgeonfish are primarily herbivores. In the wild they graze on benthic algae, detritus, and diatoms. In the aquarium the majority of their intake will be vegetable matter, but they do need some meaty foods as well. Provide lots of marine algae, prepared frozen formulas containing algae or spirulina, frozen brine and mysid shrimp, and flake foods. Feed at least three times a day.