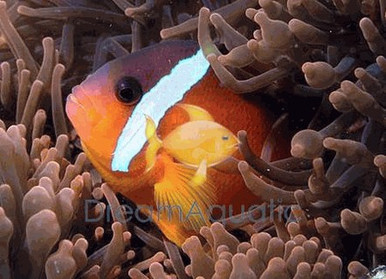 Tomato Clown Fish - Amphiprion frenatus The Tomato clownfish is also known as bridled clownfish, red clownfish, or tomato anemonefish. It has been classified also as Amphiprion ephippium, Amphiprion macrostoma, Amphiprion melanopus, Amphiprion polylepis, and Prochilus polylepis. The adult Tomato Clownfish is bright orange-red, with one white vertical stripe just behind the eyes, joined over the head. Some vareties have darker coloration or dark spots on their flanks. Juveniles are a darker red, with three vertical white bands and black pectoral fins. The Tomato Clownfish can sustain even without a host anemone. It is reported to be aggressive and territorial when mature and specimens have been known to be extremely aggressive to clownfish of other species if not introduced at the same time. For this reason, it is best kept singly or in mated pairs; but some claim that it will cohabit with other clownfish varieties if they introduced at the same time. It is easy to breed; the fry can be fed on baby brine shrimp and rotifers. Maintenance difficulty. They usually rely upon Entacmaea quadricolor. As a pet, a 20-gallon tank aquarium is suggested so that the Tomato Clownfish can have enough space. A quarantine tank is suggested because this helps the fish from saltwater disease. Avoid keeping the Tomato Clownfish in an aquarium with Lionfish, Snappers, Groupers, Triggers, Eels or any other predatory fish large enough to eat them. Keep only one clown species in your aquarium. Do not mix the various clown species. The Tomato Clownfish can be territorial with other fish that approach their space in the tank. They may also scrap with other clownfish species in the same tank and for this reason it is advisable to only keep one species in your tank. If you have an extremely large tank you may be able to keep more than one clown species in your aquarium. They may also fight with other tomato clownfish in the same tank. Habitat:
The Tomato Clownfish (Amphiprion frenatus) is a clownfish that is found in the waters of the Western Pacific, from the Ryukyu Islands, Japan, to Malaysia and Indonesia. General Size Specifications:
The Tomato Clownfish can grow to 14 cm (5.5 in) in length , however the female is usually larger than the male. The eggs are deposited on a flat surface and tended by the pair until they hatch (6 to 11 days). They prefer to nestle in purple anemones such as the Bulb Tipped anemone (Entacmaea quadricolor) or the Sebae Anemone (Heteractis crispa). Lifespan: They have a life span of about 6 to 8 years. Feeding and Diet:
The Tomato Clownfish or Red Clownfish is generally easy to keep. It feed all kinds of live, frozen, and flake foods. Best to feed small amounts several times a day. In a reef situation they don't really need to be fed very often at all. Breeding:
All Tomato Clawnfish children are males when born. As they mature and start to pair Off, the dominant one will change into a female. The female is usually larger than the male and will be the primary defender of their territory.