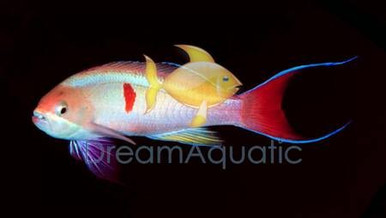 Tricolor Male Anthias - Pseudanthias kashiwae Male tricolor anthias are yellow towards the rear of the body, have an orange head and a broad red bar on their side. Females are light red with yellow marks on the scales and a white belly. Both sexes have a violet band from below the eye to the pectoral fin base The glow of the colors of this species make the Tricolor Anthias truly a showpiece (especially in groupings with one male and a number of females!). It is best to have only one male per aquarium. This is a hardy and aggressive anthias species. It is best to keep solitary individuals, unless you have an extra large aquarium. It has been known to behave aggressively toward other zooplankton-feeding fishes. It is prone to color a weight loss if not given a varied diet and an ample quantity of food. Provide clean, well oxygenated water, along with plenty of water movement and open swimming space. Maximum Size: The Tricolor Anthias grows up to 4 inches. Minimum Tank Size Suggested: The Tricolor Anthias prefers a tank of over 50 gallons Water Conditions:
Needs to be high and consistent. Live rock, macro-algae and if you can an accessory sump/refugium with ongoing crustacean co-culture will keep your zooplanktivorous livestock in good health and activity. Habitat:
Tricolor Anthias are found near West Pacific Ocean: Andaman Sea to Fiji, north to the Philippines and south to Great Barrier Reef Natural Environment: Inhabit coral heads in open sandy areas and along outer slopes and drop-off areas Feeding and Diet:
A typical meal for an Tricolor Anthias is comprised of zooplankton and small animals such as Brine Shrimp and copepods. In the wild, Tricolor Anthias form large schooling groups on the reefs. Breeding:
Tricolor Anthias species all share the trait of being hermaphroditic. If a dominant male perishes, the largest female of the group will often morph to take its place.