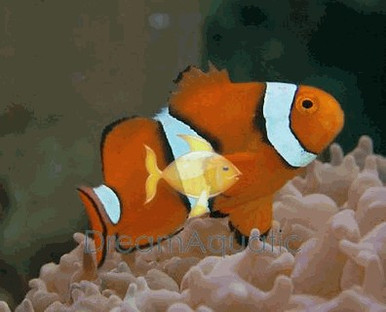 True Percula Clown Fish - Amphiprion percula The Percula Clownfish (Amphiprion percula) is a popular aquarium fish, even more so after it rose to stardom in Finding Nemo. Like other clownfish (also called anemonefish), Percula Clownfish often lives in association with the sea anemone Heteractis magnifica, using them for shelter and protection. Although popular, maintaining the Percula Clownfish species in captivity is rather complex. The Great Barrier Reef Marine Park Authority have issued large numbers of collecting permits to aquarium fish dealers, whose ranks have swelled as a result of increased demand due to the movie. The Heteractis anemone helps the Percula Clownfish by giving it protection from predators, which include brittle stars, wrasses, and other damselfish, and the Percula Clownfish helps the anemone by feeding it, increasing oxygenation, and removing waste material from the host. The Percula Clown anemonefish can be recognised by its orange colour with three white bars and black markings on the fins. Maximum Size:
It grows to about eight cm in length. This species can be mistaken for the similar species called false clown anemonefish due to its color and pattern - the "easiest" way to tell them apart is the fact that percula has 10 spines in the first dorsal fin and ocellaris has 11. Feeding and Diet:
In nature, the Percula Clownfish is an omnivore. In an aquarium, it will readily accept most meaty foods and herbivore preparations. Breeding:
Since the Percula Clownfish live in a warm water environment they can reproduce all year long. Each group of fish consists of a breeding pair and 0-4 non-breeders. Within each group there is a size-based hierarchy: the female is largest, the male is second largest, and the non-breeders get progressively smaller as the hierarchy descends. If the female dies, the male changes sex, becomes the breeding female and the largest non-breeder becomes the breeding male. It has been unclear why the non-breeders continue to associate with these groups. Unlike non-reproductives in some animal groups, they cannot obtain occasional breeding opportunities, because their gonads are non-functional. They cannot be regarded as helpers at the nest, since it has been found their presence does not increase the reproductive success of the breeders. The development of the Percula Clownfish from juvenile to adult is dependent on the system of hierarchy. There is aggression involved in these small families although usually not between the male and the females. The aggression usually is between the males. The largest male will bully the next smallest male and the cycle continues until the smallest fish leaves the host anemone. Percula Clownfish are very competitive fish and this causes the smaller fish to have a stunted growth. However in an aquarium, this fish is peaceful, and it can live in an aquarium environment well. The Percula Clown anemonfish lay their eggs in a safe spot close to the anemone for where they are easily protected, and the parents can retreat to the safety of the anemone if danger threatens. Percula Clowns usually lay their nests in the evening after a few days of carefully cleaning and examining the chosen site. Preferred eggs sites are a flat or slightly curved rock or some other item the fish have dragged near to their nets for the purpose. (In captivity, clay pots and saucers are an attractive choice.) First the female deposits some eggs with her ovipositor (a whitish tube descending from her belly), making a wiggling pass over the surface, then the male follows behind her fertilizing the eggs. After many passes, the nest is complete and will hatch in 6-8 days shortly after sunset, usually on a very dark night. In the meantime, the male is very protective of the nest and ceaselessly fans the eggs and checks them for any bad eggs, which he eats before they can rot and damage more eggs. Females may or may not help the male tend the nest. At hatching, the larvae burst free and swim up toward the moonlight and the open ocean to ride the currents and eat plankton for about a week, before the still tiny metamorphosized clowns return to the reef and look for an anemone to settle into.