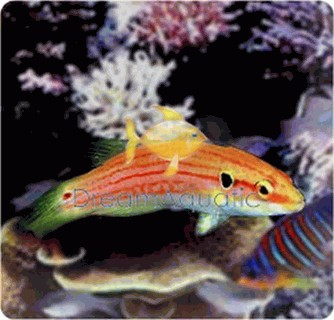 Two Spot Hogfish, Bodianus bimaculatus, may be the best Hogfish for the home aquarium, largely because of its maximum size of around four inches. Other traits in its favor include is hardiness and great color. Also known as the Yellow Hogfish, the yellow beauty has lateral striping of pink and white down its midsection. And, true to its scientific name with bimeaning ñtwoî and maculatus meaning ñspotsî, it does have two dark spots; One is around the gill plate and the other at the junction of the caudal fin. The Two Spot Hogfish is one of the only Hogfish that will do fine with groupings present in the same aquarium. Introducing four or more at the same time ensures best chances for success. Eventually, one larger male will display more pronounced coloration and will emerge as the dominant fish of the group. It is not recommended for the reef aquarium, as larger specimens may feed on smaller invertebrates and may damage clam mantles. An active fish, it does require feedings multiple times per day and plenty of swimming space. Brine shrimp, black worms, or saltwater feeder shrimp should be routinely provided to maintain best health. The Twinspot Hogfish is one of the smallest Hogfish. Because of this it is better suited to a life in a smaller aquarium than itÍs cousins. Will easily adjust to a captive life and captive diet. As juveniles, most Hogfish should be kept with non-aggressive and docile tankmates. Maximum Size: Two Spot Hogfish can grow to over 3 inches in length. General Size: Two Spot Hogfish can grow to 4 inches in length. Minimum Tank Size Suggested: A 30 gallon or larger aquarium provides a very good environment for this species of hogfish. Tank Conditions: The Two Spot Hogfish should ideally be kept in temperatures between 72 and 78 degree Fahrenheit. The Ph balance of the water should also be maintained between 8.1 and 8.4 as they prefer alkaline content of the water to be high. The specific gravity should be maintained ideally between 1.020-1.025. The tank must be decorated with artificial caves and rocks; as these rock structures simulate their artificial coral reef environment. Habitat: The Two Spot Hogfish is mainly found in the Indo-Pacific. Feeding and Diet: The Two Spot Hogfish feed a varied diet consisting of chunks of meaty foods. These foods include krill, raw table shrimp, squid, clam and mussel.